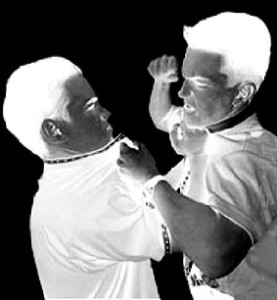 Do you need a lawyer for a simple assault charge in South Hackensack? Contact us now for help.

The South Hackensack simple assault attorneys at the Tormey Law Firm LLC recently represented a victim in a municipal court assault case whose assailant later filed his own complaint against our victim. Facing an assault charge of his own, our client was confronted with the possibility of up to 6 months in the Bergen county jail, fines of up to $1,000, and a conviction on his criminal history. These are known as “cross-complaints” in Municipal Court. In addition, the other party’s girlfriend filed a restraining order against our client which we had dismissed in Superior Court.

The police filed the original complaint against the other party when that man came to our client’s place of employment and assaulted him in front of several coworkers and customers. Our client defended himself appropriately and witnesses called the police. After investigating the incident, the police officers decided to charge the other man and not file any charges against our client. After several weeks, the other man went to the court and filed his own complaint against our client for simple assault, a disorderly persons offense criminal charge.

In court, attorneys for the Tormey Law Firm were able to successfully negotiate the dismissal of the complaint against our client without subjecting him to the stresses and risks of going to trial. In yet another victory for the firm and for our clients, we were able to save our client from having a conviction on his record and from being subjected to any period of incarceration or monetary fines.

If you or a loved one is in need of assistance with a simple assault charge in NJ, contact our offices anytime for a free consultation at 201-556-1570.