The type of weapon involved in the crime determines the degree of the charges for possessing a prohibited weapon or device in New Jersey. This serious charge could mean up to 5 years in prison for a third degree indictable offense. 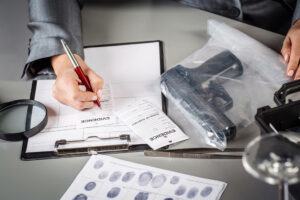 New Jersey residents aiming to protect their homes and families from crime might purchase firearms, such as handguns or rifles. They might feel safer knowing that they are not defenseless against a potential attack on their person or home by someone with a weapon. And purchasing a firearm is legal, so long as the person qualifies for owning a firearm, fills out the necessary paperwork, provides the proper identification, and is approved by the state for a gun permit. New Jersey’s laws are firm about legal ownership of weapons and equally stringent about illegal weapons. If the police find you with illegal weapons, you could be jeopardizing your financial freedom and your personal liberty.

What are Prohibited Weapons and Devices in New Jersey?

New Jersey law classifies illegal weapons into destructive devices, sawed-off shotguns, silencers, handcuffs, defaced firearms, and other miscellaneous potentially dangerous items, such as various types of knives like daggers and dirks, large-capacity ammunition magazines, brass knuckles, and slingshots. Destructive devices include bombs and other explosive devices containing combustible components, like TNT, dynamite, Molotov cocktails, or grenades. And sawed-off shotguns are those that have been shortened or otherwise altered so that they are not the legal length of 26 inches long or the barrel alone is shorter than 18 inches. To further clarify, defaced means altering or destroying parts of the firearm, like removing parts or destroying identifying details of the weapon, such as the serial number. If the firearm is an antique, however, the law does not punish you if you are licensed to own the antique.

Collector’s items aside, what all prohibited weapons have in common is their potential to maim or kill someone. For example, outlawed large capacity ammunition which is more than ten rounds of bullets, so fewer bullets reach their target in quick succession. Furthermore, automatic weapons may be owned for competitive shooting through authorized organizations, like the army. However, certain types of knives, brass knuckles, maces, and ammunition, like hollow nose bullets or those made to pierce body armor, for example, dum-dum bullets that expand on impact, have no recognized recreational purpose.

Possessing a prohibited weapon or device is considered an indictable offense in New Jersey, provided that the item in question is not handcuffs for inappropriate uses. Owning or having destructive devices or sawed-off shotguns is a third degree crime, which means a possible sentence of three (3) to five (5) years in jail and $15,000.00 in fines. Owning or having other illegal weapons is a fourth degree crime. Remember, violations of N.J.S.A. 2C:39-3 are felonies of the third or fourth degree, except for handcuffs, which is a disorderly persons offense. Fourth degree crime sentences can go as high as 18 months’ incarceration and up to $10,000.00 in fines, while a disorderly persons offense is punishable by up to 6 months in jail and a $1,000.00 fine. Sentencing for disorderly persons offenses occurs in the municipal court, while indictable offenses sentences issue from Superior Court judges and apply in most weapons cases.

Ordinarily, fourth degree crimes do not carry a presumption of incarceration, meaning a judge does not start with the assumption that the defendant will be sentenced to prison, but that may not be the case for possessing illegal weapons and devices. Unless you are in the military or law enforcement, are a dealer or collector of antiques with the proper license, or an employee or agent legally required to carry the prohibited item specified in N.J.S.A. 2C: 39-3 for your job, you risk arrest and conviction for possessing prohibited weapons and unlawful possession of a weapon.

If convicted, you not only face the possibility of maximum sentences under the law, but certain crimes involving firearms are subject to the Graves Act. Under the law, a person convicted of or pleads guilty to a firearms violation must serve a mandatory number of years before they can even request parole. While most sentences allow early parole and release for earned credits in prison, the Graves Act eliminates the possibility of parole until minimally three years have passed, or one-third to one-half of a third- or fourth degree crime sentence, whichever is longer. So, if you are found guilty of possessing a sawed-off shotgun or defaced firearms, even if unloaded, your sentence falls under the Graves Act. A judge may allow a lesser sentence in the interests of justice or if reduced charges is warranted. For that you will need a Graves Act Waiver, which is not a simple outcome to obtain. Otherwise, Graves Act crimes may not be bargained down.

How an Attorney can Help with Your Defense for N.J.S.A. 2C:39-3 Charges

The prosecutor’s burden is to prove that you knowingly possessed the illegal weapon or device and knew that the weapon or device was one of those prohibited by law. For example, if an illegal weapon is found in your car when you were stopped, but the defaced firearm was one you inherited. You had no idea what it was but were on your way to an antique dealer to find out what the gun was worth. In this scenario, you may have a strong case. And there are many ways to fight an illegal weapons charge.  For example, the police who pull over a driver for an expired registration may not have a legitimate reason to search the vehicle. If there was no probable cause that the vehicle contained evidence of illegal activity, the police might not have had a valid reason to conduct a search. Many people feel compelled to cooperate with the police, maybe believing they will be let off easy if they’re nice. And police know how to use that fear and eagerness to please to extract someone’s consent for an improper search.

This is where an attorney comes in. Even if you did know that you had an illegal weapon, an attorney can help you reduce your sentence by arguing for mitigating factors that should be recognized or plea bargaining for lesser penalties. The fact that your possession of an illegal weapon posed no harm to anyone, that you have no prior violations of law, that you cooperated with law enforcement, and that you pose no future threat of criminal behavior may all be mitigating factors.

A knowledgeable and talented weapons defense attorney can find ways to chisel away at the prosecutor’s case and appeal to the judge’s sense of fairness. In other words, an experienced lawyer knows how to paint a human portrait to counter how the prosecutor portrays defendants as bad guys committing crimes. Sure, the New Jersey legislature designed strict firearms and weapons laws to severely punish violators for the purpose of deterring violent crime. And the prosecutor’s job is to enforce and uphold the state’s laws. Those accused of violating weapons laws often have an uphill battle. And yet, judges, prosecutors, and juries must consider all the circumstances of a crime, the evidence, and the distinct character of the accused. This is why having an accomplished weapons crimes lawyer is so crucial to the success of your case and your defense.

If you or someone you care about has been charged with owning or possessing prohibited weapons and devices in New Jersey, contact The Tormey Law Firm 24/7 to get help from an attorney who practices criminal law and specifically handles defense against weapons charges.

Our attorneys have advanced tactics for beating gun charges and weapons offenses in courts across the state of NJ, including in Bergen County, Morris County, Essex County, Middlesex County, and Union County. We know what is at stake in your case and will fight for you. Contact our office at (201)-556-1570 for a free and confidential consultation. Your liberty may depend upon it.