“Watch this video to learn more about the Graves Act, and its effect on New Jersey gun charge sentencing minimums.”

What is the Graves Act?

The Graves Act governs a variety of firearm offenses in New Jersey and mandates minimum terms of imprisonment without parole.

New Jersey takes weapons offenses seriously, as is evidenced by the countless innocent people who have been incarcerated because of the gun laws in this state. The sentencing section of the law that penalizes those convicted of possessing certain weapons and allows for extended incarceration is referred to as the Graves Act. The Graves Act is outlined in the New Jersey Criminal Code, namely N.J.S.A. 2C:43-6.  This provision requires the court to sentence people to jail with mandatory minimum terms if the individual is found in possession of a gun or commits certain crimes while in possession of guns. Specifically, the court must sentence you to serve one-third to one-half of your sentence before you are eligible for parole, or three years, whichever is greater. In other words, a conviction for a typical Graves Act offense means that you must serve a minimum of three years of your total sentence before you are eligible for parole.

Overall, the prohibited weapons governed by the Graves Act that subject you to such sentencing are: 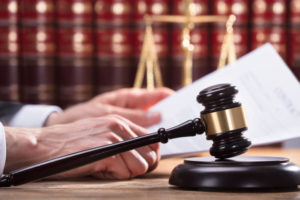 The minimum period of parole ineligibility required for offenses governed by the Graves Act is 42 months or 1/3 to 1/2 of the sentence imposed, whichever is greater. Notably, the mandatory sentence is reduced to a minimum of 18 months for a fourth degree crime. And a repeat offender who violates the stringent gun laws in New Jersey receives an extended prison term with parole ineligibility for 5 years or 1/3 to 1/2 of the given sentence, whichever is longer.

Many people traveling from outside of the state are licensed gun owners in their home states.  They unknowingly enter into New Jersey while illegally possessing their weapon and then have the misfortune of being pulled over. These drivers, many of whom are commercial truck drivers or visitors, advise the police that they have a weapon. In their home states, being forthcoming is required if you are a gun owner.  And while they may faithfully follow the laws in their home state, unfortunately they are arrested in New Jersey. As soon as the officer knows that the person has a weapon and is not licensed in New Jersey, he has no choice but to arrest him or her. The charge that ensues is a second degree crime that falls under the Graves Act. To address this issue of charging otherwise law-abiding citizens from other states, the New Jersey Attorney General issued a directive providing prosecutorial discretion in these cases. Fortunately, this allows some gun owners from other states to gain entrance into the Pre-Trial Intervention (PTI) program to avoid conviction and mandatory Graves Act sentencing.

There is another safety valve built into the law and provided for by the Attorney General’s Office, known as a Graves Act waiver.  The waiver permits a departure from the mandatory minimum terms that must be imposed. If you have never been convicted of a weapons offense, you may be entitled to a Graves Act Waiver.  Under N.J.S.A. 2C:43-6.2 , the prosecutor can submit a waiver application to the Judge to allow you to forgo any prison term. These waivers are intended to reduce the mandatory minimum term to one year of parole ineligibility, probation, or Pre-Trial Intervention (with a guilty plea). A prosecutor’s motion will specify that the interests of justice are better served by a reduction in your sentence, rather than by sentencing you to the three year minimum otherwise required by the Graves Act. Our attorneys can assist you with determining your eligibility for a Graves Act waiver and further aid in presenting your case for PTI or probation, as we have successfully done this for clients statewide.

Charged with a Graves Act Gun Offense in NJ? Get Help Today

If you have been charged with a Graves Act Offense in New Jersey, it means that you are potentially facing a mandatory sentence with substantial time in jail before you can ever be considered for parole.  Due to the seriousness of the offenses and ensuing consequences, it is important to get in touch with an attorney at the onset of the case.  Whether your charges involve unlawful possession of a handgun, machine gun, rifle, shotgun, or possession of a weapon for an unlawful purpose, our New Jersey Graves Act defense lawyers are prepared to defend your rights. Contact us today if you have been arrested for a weapons offense in Bergen County, Morris County, Essex County, Passaic County, Middlesex County, or another community in the greater New Jersey area. One of our knowledgeable attorneys is here to provide you with a free consultation. (201)-556-1570.

“If you have a current gun case, learn how you can beat it by watching the videos below.”

How To Beat Gun Charges: