Complaint and Arrest in a Criminal Case

Complaint and Arrest in a New Jersey Criminal Case

“If you have been arrested and charged with a criminal offense in New Jersey, read this page to understand the process of arrest, filing a complaint, and first appearance in Court.” 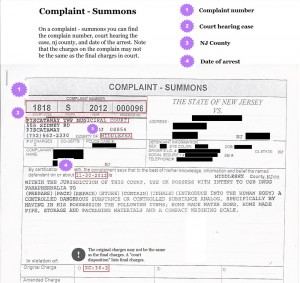 In a more uncommon situation in which a citizen files a complaint against you, called a citizen complaint, a judge must review the case in order to determine if probable cause exists for the issuance of the initial criminal complaint/charge. If said complaint is issued, you will then be arrested, formally charged, and processed. Processing occurs at the police station in the municipality in which the charges have been filed and involves personal documentation, fingerprinting, and obtaining a photograph, commonly referred to as a “mugshot.”

If you have been arrested and charged with a criminal offense in New Jersey, it is absolutely essential to enlist an experienced NJ criminal defense attorney who can walk you through every phase of the legal process ahead. A knowledgeable criminal defense lawyer can evaluate all of the circumstances surrounding your arrest and complaint to determine if your rights were violated at some point during the process. To speak with one now, call The Tormey Law Firm at (201)-556-1570 for a free consultation.

What Happens after I’m Arrested in NJ?

Once you have been arrested, a criminal complaint has been filed against you, and you have been processed at the police station, you are considered “charged with a criminal offense.” At this point, the degree of the charges will determine what happens next. In some instances, specifically those in which you have been charged with a disorderly persons offense such as possession of marijuana, disorderly conduct, drug paraphernalia possession, or shoplifting under $200, you may be issued a complaint with a first appearance listed on it and sent home. On the other hand, if you have been charged with an indictable offense (a felony), you must appear before a judge for a detention hearing.

At the detention hearing, the judge will decide to release you on your own recognizance, to release you with certain conditions, or to remand you. Being remanded means you will be detained in jail until your trial. Since New Jersey enacted bail reform, the decision to remand or release you is based on a risk assessment scale, which takes into account the nature of the offense, criminal history, flight risk, and potential danger to the community. If you are released or remanded after being charged with a criminal offense in NJ, you will be scheduled for a first appearance in Municipal Court or Superior Court.

During the first appearance, the presiding judge will inform you of the charges against you, as well as the potential penalties associated with a conviction. In addition, you must enter a plea of “guilty” or “not guilty.” In the majority of cases, defendants plead “not guilty,” then the judge enters the plea and schedules the next court date upon which the case will be heard. If you have been charged with an indictable crime (fourth, third, second, or first degree), the case will be transferred to the County Prosecutor’s office to be reviewed.

After examining all of the evidence, members of the prosecutor’s office will determine whether the case should be adjudicated in the Superior Court, which requires the filing of an indictment, or if it should be remanded to be heard in the municipal court. If the case is remanded, the charge is then downgraded to a disorderly persons offense, which is considered a less serious crime according to the New Jersey Criminal Code. If the Prosecutor’s Office decides to proceed, you will have an opportunity to meet with them and consider their initial plea offer at a Pre-indictment Conference. Ultimately, the degree of the charges and the stance of the prosecutor’s office significantly impacts the penalties associated with a conviction for the offense.

If you have been arrested and issued a criminal complaint in New Jersey, seek legal guidance from an experienced criminal defense lawyer who can protect your rights. Travis J. Tormey is a renowned New Jersey criminal defense attorney who serves on behalf of clients facing a vast array of charges, ranging from marijuana distribution to aggravated assault. With centrally located offices in Morristown, Hackensack, Newark, New Brunswick, and Middletown, he and the team of talented attorneys at The Tormey Law Firm appear in courts across New Jersey on a daily basis fighting for their clients.

Having successfully handled thousands of criminal cases in New Jersey, our defense lawyers have accumulated a great deal of experience navigating the complex legal process in both Superior and Municipal courts. Our practice concentrates solely on criminal law, which allows us to develop a breadth of knowledge in the area of criminal defense. We use this repository of information to identify the legal and constitutional nuances involved in each case and thus, to best represent our clients.

Charged with a crime in New Jersey? The Tormey Law Firm can provide you with the information and assistance you need to best address each step of the legal process. Contact us anytime at (201)-556-1570 for a free consultation regarding your case.