“This is an example of a Newark DWI refusal case that I was able to have thrown out of court. Loopholes like this exist in many DWI and refusal cases.” 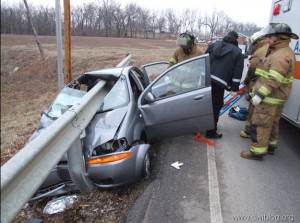 She faced a 7 month license suspension on the refusal charge and a three month suspension on the DWI itself, as she was charged with both. Obviously, this is coupled with potential jail time and a pile of fines/insurance surcharges.

My client was driving down the New Jersey Turnpike and hit a guardrail.  The car was badly damaged, the airbag was deployed, and my client might have been experiencing the symptoms of a concussion as well.  Logically, she was taken to the hospital to be cared for.

The police officer claimed to have smelled alcohol on the defendant’s breath, so he arrested her for DWI.  He also requested that she take a blood or urine test at the hospital, a request that the defendant refused.  Remember, a charge for refusal applies to breath testing.  At no point do the police have the right to demand your blood or urine.  In addition, there needs to be probable cause for testing someone’s blood alcohol content.  This is usually established by conducting a series of field sobriety tests, where someone has the opportunity to stumble, fall, say something dumb, or do any other number of things which would give the officer probable cause to conduct a breath test.  The officer never conducted a series of field sobriety tests for my client.

We ended up accepting a plea bargain in this case, in which the defendant plead guilty to careless driving and took a very short license suspension.  Considering that an accident had taken place, her punishment could have been extreme.  We were very happy to get all DWI related charges dismissed and celebrate this victory.

Charged with DWI or Refusal in Newark NJ?

If you have been charged with drunk driving or refusing to take a breath test in Newark, New Jersey, contact us today for a free consultation. An attorney who regularly defends clients facing DWI and refusal charges in Newark is here to answer your questions and talk through your specific case. Just call (201)-556-1570 to learn more.