In all phases of juvenile custody and detention, a dedicated defense lawyer is critical to protect the young person’s rights and ensure they have the best chance of success in the law enforcement and court systems in New Jersey. Even at an initial meeting at the police station or an informal hearing where attorneys are not mandatory, custodial adults and their children should have legal guidance. Every youth is entitled to the most effective defense and continued protection of their rights and interests by legal counsel. Even in the event of a mistake by the minor, with the appropriate resources and second-chance opportunity, they may get what they need to avoid future mistakes that could cost them their freedom. 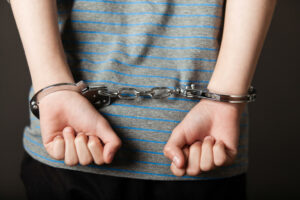 If your child or another minor under your care has been taken into custody by police, accused of a crime, or contacted in connection with a possible investigation by authorities, you can trust the wise and experienced counsel of the New Jersey attorneys at The Tormey Law Firm. We protect and defend minors at all stages of juvenile cases in Hackensack, Morristown, Newark, New Brunswick, Jersey City, Somerville, Paterson, and throughout the state. Our law firm provides free consultations 24/7 and we encourage you to contact us anytime to talk to an attorney confidentially. For your reference and understanding, below we discuss and answer some of the most important questions and issues that parents and guardians may face when confronted by juvenile detention in New Jersey.

Juvenile Stopped by Police for a Suspected Act of Delinquency

When a law enforcement officer initially stops a minor suspected of legal violations in New Jersey, the officer has several options, including a curbside warning, stationhouse adjustment, or a complaint for juvenile delinquency. Depending on the decision by the officer at this point based on the circumstances, the juvenile may be taken into custody.

If the juvenile is taken into custody, which is not technically considered an “arrest” in the traditional sense in criminal law for adults in New Jersey, the situation could go several ways. The first thing to know here is that officers are required to contact the juvenile’s parents, guardians, or another custodian. At the police station, the officer determines if the juvenile should go home with a parent and advisement or if a legal complaint is necessary. If a complaint is filed, the juvenile can be released with a parent or guardian after the filing of the complaint, or further detained until a pretrial detention hearing.

When filing a complaint, an officer reads the juvenile’s rights and refers the case to court intake services to determine what happens next. Next, the case may go to an informal proceeding before a juvenile referee or the superior court family division. The informal hearing may include discussing the charges with the referee and admission or denial. The hearing result is an agreement between the minor, their caretakers, and the court on what the juvenile must do before a specific date. Once the minor fulfills the terms of the agreement, perhaps attending counseling or classes, or other actions aimed at rehabilitation, the court dismisses the case. However, a juvenile who does not fulfill the agreement or who law enforcement detains in a facility must await a judge’s determination of their fate in the superior court.

Depending on the offense, the minor may be forced to wait for a judge’s adjudication at the hearing before either being released or further detained. Even if detained, the juvenile is not necessarily in jail. The laws and practices governing minors aim to foster young people and encourage them to avoid further behavior that can lead them to adult prison. A juvenile initially detained and subject to a pretrial detention hearing may go home or to an approved facility if the judge confirms the parents, guardian, or agency officials will ensure the juvenile returns to court for all scheduled hearings. They can also release a 14-year-old or older minor on their own recognizance if they pose no public threat, they have a verified address, they are likely to return to court, and their parents are unreachable. This can be done by the judge, by the court intake service, or by law enforcement.

It is important to understand that only a judge or court intake services can order the juvenile to await court judgment in a detention center. An initial pretrial detention hearing occurs the next day if the juvenile is in a detention center. Parents, guardians, or other caregivers receive notification and must attend the hearing. However, the hearing goes forward regardless of who else attends unless the youth appears in court without counsel. In that case, the juvenile court conducts a second hearing two days later with the juvenile represented by counsel (Rule 5:21-3). If the initial detention hearing leads to further detention being ordered, then a probable cause hearing must follow within two days.

What Happens if a Probable Cause Hearing is Held for a Minor?

At the probable cause hearing occurring within two days afterward, the court examines the complaint and reports, deciding whether the police had probable cause to believe the youth committed the crimes alleged. Probable cause determinations ensure the police did not violate a minor’s constitutional rights in detaining them with insufficient cause and that there is evidence to support the initial charges. If the judge determines lack of probable cause to believe that the juvenile actually committed the offense that gave rise to the complaint, they will be released. In other words, if the court finds no probable cause, the juvenile is free. On the other hand, if the judge finds sufficient probable cause, the court process that follows must comply with the detention review hearing requirements.

What is the Process for Detention Review Hearings?

Important considerations supporting detention include the nature and circumstances of the alleged crime, the minor’s age, community connections, juvenile history, failure to appear in court, and days in detention. Those deemed a risk of not returning to court or a community threat remain in detention centers pending a determination of delinquency and sentencing. Juveniles with histories of not appearing at hearings or with charges of serious adult crimes are more likely to be further detained.

Even if the court orders the juvenile detained, the minor goes to either a juvenile detention facility, shelter care, or some other place that is not an adult prison and only those that are authorized by the Department of Children and Families or State Juvenile Justice Commission. ((R.5:21-4)). There are also requirements based on the juvenile’s age. Specifically, for youths under 11-years-old, the court may detain them before trial only if they are charged with an offense that would be a high crime (first degree crime or second degree crime) if committed by an adult and other applicable factors exist.

What if a Juvenile is Sentenced to a Detention Facility after being Adjudicated Delinquent?

Some juveniles are adjudicated delinquent for committing more serious crimes that would land them in prison for years if they were adults. As such, a juvenile legally adjudicated an offender, or juvenile delinquent, is potentially subject to detention in a juvenile facility. The court considers the severity of the crime and the juvenile’s history with the legal system, among other important factors, when determining delinquency punishment.

How can a Lawyer Help with the Juvenile Custody and Detention Process?

Although it may be frightening to a parent whose child is in legal trouble, there is no need to panic. A juvenile defense lawyer can represent the family’s interests and steer the court toward rehabilitative efforts that promise to promote a minor’s successful completion of their agreement or sentence. A highly qualified criminal attorney may also succeed in avoiding an adjudication of delinquency and sentencing altogether if the facts of the case offer arguments for dismissal. While a law enforcement officer’s and prosecutor’s job is to protect the public from crime, their interest to ensure that a minor does no harm to society does not always trump the court’s aim to rehabilitate a young person or their right to the most vigorous defense. Moreover, the prosecution does not view a potential juvenile delinquent with the insight of a parent/guardian and a knowledgeable, compassionate lawyer.

At The Tormey Law Firm, our team of defense lawyers has successfully defended hundreds of juvenile clients, handling everything from initial meetings with police, to juvenile detention hearings, adjudication hearings in Family Court, and juveniles tried in adult criminal court after a prosecutor’s motion and a court’s granting of a Juvenile Waiver Request. Consult with an exceptionally well-versed lawyer at our New Jersey firm promptly if your child faces police investigation, a complaint for delinquency, and juvenile detention pretrial or thereafter. Ensure you get the best advice and representation to help your child through tough challenges that come their way in the legal process and offer their best chance of reaching a favorable outcome. Call (201)-556-1570 for a free consultation or reach out to us online.