Contempt of Court in New Jersey

“Contempt Charges N.J.S.A. 2C:29-9 can result in serious penalties for those charged with violation of a court order in NJ, including a restraining order. Depending on the case, you could face a disorderly persons offense or fourth degree crime.” 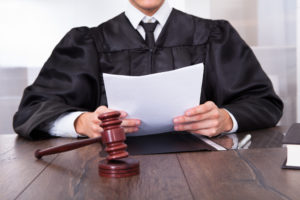 You can be charged with contempt for any violation of a court order in New Jersey. This includes restraining orders in domestic violence cases. Contempt of court for disobeying a judicially-authorized order can expose you to significant consequences, which vary depending on the nature of the offense and the facts of your case. For example, contempt may be classified as a disorderly persons offense in many cases but the charges may also be enhanced to a fourth degree crime if they are based on specific acts that violate a restraining order. When it comes down to it, the contempt charge in your case will be determined by the original court order that was violated and the conduct that led to the contempt charge. If you or someone you love has been arrested for contempt in NJ or is otherwise accused of violating a court order, it is critical to understand the specific repercussions you are facing and the defense strategies that an experienced attorney can use to win your case.

The Tormey Law Firm is a team of highly knowledgeable defense lawyers who frequently help clients beat criminal and domestic violence charges in courts throughout New Jersey. We have former domestic violence prosecutors, criminal prosecutors, and renowned criminal attorneys who have appeared in front of countless judges in these cases and use this valuable insight to develop the best defenses. With local offices in Hackensack, Morristown, Newark, New Brunswick, and Middletown, our firm is dedicated to providing superior representation to anyone charged with a crime or facing a restraining order in the greater NJ region. For a free consultation with a lawyer thoroughly prepared to defend your case, contact us now at (201)-556-1570. You can also reach out online 24/7 for the help you need.

Under N.J.S.A. 2c:29-9, the New Jersey Legislature has granted judges the authority to monitor and maintain their courtrooms to an appropriate level. If someone or something disrupts a court proceeding or person violates a court order, the judge may order the police to halt or detain the individual and charge them with Contempt of Court. Note that judge can charge anyone with Contempt of Court, including jurors, attendees in the audience, lawyers, and defendants. A person can also face Contempt charges if they disregard an order entered by the court, including a restraining order based on domestic violence allegations.

What are the Penalties for Contempt in New Jersey?

Contempt of court is typically a disorderly persons offense in New Jersey, which carries up to 6 months in the county jail and a $1,000 fine. This is technically criminal in nature, so a conviction will appear on your criminal record. However, in domestic violence cases, the state may charge you with contempt for violation of a restraining order as either a fourth degree crime or a disorderly persons offense. Even if the violations were unintentional or committed in good faith, the state may proceed with harsh penalties. For instance, a minor violation, such as making contact via email or telephone, could lead to charges for a disorderly persons offense. However, more severe violations that would otherwise constitute a crime, such as harassment, stalking, or physical contact, could bring fourth degree consequences.

When contempt of court is a fourth degree crime, the sentence can include a $10,000 fine, up to 18 months of incarceration in NJ state prison, probation, and a fourth degree felony conviction. After the possible $10,000 fine and 18 months of incarceration, convicted individuals will have a criminal record that indicates a felony conviction. The searchable criminal record will be available to both future and current employers, ultimately affecting employability and many other potential opportunities.

Get Help with Your Best NJ Contempt Defense Today

Our team of experienced criminal defense attorneys strongly recommends that you kind in mind the severe consequences of contempt charges in New Jersey and seek defense counsel from an experienced attorney if you have been charged with contempt, no matter how minor the violation may appear. Failure to take action and take an aggressive stance against these accusations can be detrimental to your life for years to come. Contact us now at (201)-556-1570 to speak with lawyer about your contempt of court charges and discuss the best defenses that may be available to you.