Charges for Pointing a Firearm in NJ 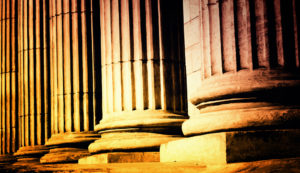 Pointing a gun at someone in New Jersey drags you into the criminal justice system just as if you stole a pair of jeans from the local store or got in a bar fight. It is a fourth degree crime under N.J.S.A. 2C:12-1b(4), which makes it a crime to brandish a firearm. If convicted, a defendant faces up to 18 months in prison and a fine of up to $10,000. All the state must prove is that the defendant had a gun and intentionally pointed it at someone, without regard for the safety, wellbeing or life of another. According to the New Jersey Criminal Code, brandishing a gun constitutes aggravated assault.

Depending on the situation, pointing a gun at someone may be intentional, unintentional or defensive. For instance, someone believing an intruder is on their property may point a gun to prevent them from coming near their house and family. Another person may point a gun to scare someone in a fight, or still another person may not even know anyone else is around while they are carrying a gun. Many scenarios could show greater or lesser menace in the act of pointing a gun. Bearing this in mind, you need an active, aggressive, well-formulated defense approach to beat these charges or use an alternative strategy for getting the charges dismissed. A good attorney should be able to argue the facts that show an innocent misunderstanding or unfortunate circumstances, rather than a menacing brandishing of a gun to threaten or assault a person. We should know, as our highly experienced criminal defense lawyers do this on a regular basis for clients facing all manner of assault charges and weapons crimes in New Jersey, including assault on a police officer, unlawful possession of a weapon, and terroristic threats. To speak with an attorney regarding your individual case, contact us at (201)-556-1570. We provide free phone consultations and a member of our defense team is here to provide personalized answers and assistance to you now.

Aggravated Assault Charges for Pointing a Gun in New Jersey

For the fourth degree crime of intentionally pointing a firearm at someone, while showing extreme indifference to the value of another’s life, a defendant must have intentionally pointed a weapon, whether it was loaded or not, or whether it was a gun, rifle, shotgun or other mechanism that shoots balls, slugs, missiles, bullets, gas or other explosive, even a pellet or BB gun. Knowledge, pointing, the weapon, and disregard for the life of another is all that the state needs to prove for this crime.

Third Degree Charges for Brandishing a Firearm at a Police Officer

Now, if the pointing is at a police officer, it is a third degree crime. Moreover, the weapon can be merely displayed, not directly pointed. All guns can be used to charge you with a third degree crime if you are accused of pointing the weapon in the direction of a law enforcement officer. You can also be charged with aggravated assault for pointing an imitation firearm at a police officer. Just about any kind of fake or imitation gun can be considered an “imitation firearm” or firearm-like weapon for the purposes of the statute. This can include BB guns, Airsoft guns, pellet guns, and toy guns or water pistols. Basically, any object or item that could be mistaken for an actual gun fits the definition of an imitation firearm. For cases like this, at trial in the county superior court, the prosecution will need to establish that the defendant intentionally used the imitation firearm to intimidate, threaten, or scare the police officer. Presumably, this section of the law is meant to protect police officers who might feel threatened by the presence of what could easily be misperceived as an actual gun and then react accordingly by firing their own weapon.

Additionally, this special kind of aggravated assault charge for pointing or aiming a firearm may apply even if you did not point a gun or firearm. For example, the statute specifically allows for prosecutors to charge an individual with aggravated assault for pointing a firearm if the weapon in question was a laser device. N.J.S.A. 2C:12-1(b)(11) stipulates that a person can be charged with third degree aggravated assault if they use or activate a laser sighting system or device against a police officer and in a manner that would cause the officer to believe that the device is a weapon. Basically, anything that is attached to a firearm and that causes a laser beam resembling the kind of sighting system used to align or aim a gun constitutes a “laser” for the purposes of the criminal statute. Given the seriousness of these kinds of aggravated assault charges, as well as the increased likelihood for escalation by a police officer if they mistakenly believe that a gun is being aimed at them, it would not be advised for anyone to use a laser or any other similar type of device in a manner prescribed by the law.

This offense is subject to the No Early Release Act (NERA), which means the defendant must serve 85% of their prison sentence before becoming eligible for parole. And even if the firearm pointed at the police officer is fake but is used to place the officer in fear of injury or otherwise used for an unlawful purpose, the offender is still looking at a third degree crime and application of NERA. For these two types of offenses, the perpetrator must know they are pointing a weapon, whether loaded or unloaded, real or fake, at a police officer.

Firearms, for the purpose of the pointing statute, are considered handguns, rifles, shotguns, machine guns, automatic or semiautomatic rifles, air guns, spring guns, or any other device or instrument used as a weapon to fire or project an object or gas by explosive force. Knowingly pointing means the person has an awareness that there is high probability if not certainty that the effects of their behavior is to place another in fear of their safety or life, or to coerce someone to do something under threat of injury or death. They must also know that the person they are pointing at is a police officer, which may be inferred from the circumstances. In addition, they must have acted with extreme indifference to the value of life, meaning, they cared little whether the person or officer might be killed.

Penalties You Face when Charged with Pointing a Weapon in NJ

Typically, these charges are fourth degree crimes but if the alleged victim is police, then you are looking at enhanced charges for a crime of the third degree. If charged with a fourth degree crime for pointing a firearm, you are facing up to 18 months of imprisonment and a fine of up to $10,000. For a third degree charge against you, the possible sentence goes up to 3 to 5 years, and if the person you are accused of pointing at is a police officer, a mandatory minimum is attached to a conviction.

Notably, the same action of pointing a gun may be charged as a second degree crime under N.J.S.A. 2C:39-4, the statute that outlaws possessing a weapon for an unlawful purpose. This offense comes with a mandatory minimum sentence of 5 to 10 years in state prison and a criminal record, which shows up on background checks for jobs, schooling, and housing.

Ways of Defending Pointing a Gun Cases in New Jersey

A criminal attorney can help you defend yourself against these charges by negotiating a plea, making pre-trial motions to challenge evidence illegally obtained or maintained by the police or prosecutors, getting your case dismissed, or advocating for a lesser sentence than the statutory guidelines. Depending on the degree of the charge and your criminal background, your lawyer may also be able to help you apply for the Pre-Trial Intervention PTI program available to eligible applicants, usually of lesser crimes, like fourth and third degree crimes. The PTI program allows a fresh start for a first-time offender. After completing the supervised program consisting of rehabilitative counseling, community service, and drug testing, a defendant can clear their record.

Since gun charges fall under the Graves Act, which requires that a mandatory minimum gun violation sentence be served before being eligible for parole, to get a shorter sentence, your lawyer may have to convince the prosecutor to file a motion for a waiver of the Graves Act mandatory minimums. PTI, probation, or shorter sentences may be more appropriate to a first-time offender or another person who is basically a law-abiding citizen and can be shown to benefit from a more reasonable resolution. The most important thing to know is that there are probably more options for defending your case than you might think. Getting in touch with someone experienced with handling gun cases and assault cases, such as the criminal defense lawyers at our New Jersey firm, should be a top priority if you are looking to avoid serious punishments.

Charged with a Pointing a Firearm in NJ? Talk to a Defense Lawyer who can Help with Your Case

When you are facing criminal charges for pointing a weapon in New Jersey, the skilled lawyers at The Tormey Law Firm can defend you against one or more crimes that you may be charged with, many of which have long prison sentences. A quality criminal defense attorney with top-notch defense experience, negotiation skills, and in-depth knowledge of criminal law is invaluable from the time you are charged to the resolution of your case and beyond. We often appear in courts in Hackensack, Morristown, Elizabeth, Paterson, Newark, and throughout the state, with a continued commitment to reaching the best possible results. Call (201)-556-1570 for a free consultation and the help you need for your defense.