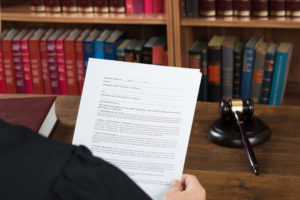 The way our world operates was drastically changed with the onset of the COVID-19 pandemic. However, it took a little while for the legal system to catch up and make the necessary adjustments. Now, with a recent ruling on pretrial detainees handed down by the New Jersey Supreme Court, it appears that the NJ legal system is making some important changes to the way it will operate going forward. Since March 2020, there have been very few criminal jury trials held in New Jersey because of the health risks posed by in-person trials to defendants, attorneys, judges, jurors, and witnesses. This has created a backlog of cases in the NJ criminal court system. Moreover, with so few criminal jury trials being held, some defendants who were ordered to remain in jail until their cases are resolved have seen their pretrial detention extended indefinitely. The obvious and inherent unfairness of this situation prompted a legal challenge from civil rights groups, and now the NJ Supreme Court has weighed in on the matter. Keep reading to learn more.

What did the NJ Supreme Court Say About the Effect of COVID-19 on Pretrial Detainees?

The New Jersey Supreme Court recently ruled in a unanimous decision that, in certain circumstances, pretrial detainees can challenge their detention because of the ongoing coronavirus pandemic. The issue was raised by the State of New Jersey Office of the Public Defender (NJOPD) and the American Civil Liberties Union (ACLU) of New Jersey on behalf of defendants being held in the New Jersey correctional system as they await resolution of criminal charges against them, and the case was decided and agreed upon by all of the sitting judges.

In its initial filing with the NJ Supreme Court, attorneys with the Office of the Public Defender and the ACLU of New Jersey asked the Court to reevaluate the status of certain defendants who have been detained as they await trial. Specifically, the Court was asked to either release or provide new detention hearings to defendants whose trials have been delayed indefinitely because of the COVID-19 pandemic and the subsequent suspension of in-person criminal jury trials in most cases.

In an opinion written by Chief Justice Stuart Rabner, the Court held that, in certain circumstances, defendants can file a motion to reopen their pretrial detention hearings and formally request release from detention before their criminal trials occur. Any motions to reopen detention hearings must be filed pursuant to N.J.S.A. 2A:162-19(f), which the Court said is meant to protect defendants against being detained indefinitely. The COVID-19 pandemic has caused a heavy backlog of cases in the New Jersey criminal courts and led to jury trials being suspended, with the Court observing that both the pandemic and the continued suspension of jury trials have “no clear end date” at this time. In addition to providing detainees with an avenue for reopening their detention hearings, the Court also held that pretrial detainees may be able to file constitutional challenges in the trial courts if they believe that their due process rights have been violated due to their detention and the significant legal delays caused by the pandemic.

So, what does the recent decision by the New Jersey Supreme Court mean for individuals currently being held by the state as they wait for their criminal cases to be adjudicated? The good news is that defendants who are currently being detained may now have the ability to secure their release before trial. The bad news is that the Court placed some pretty significant restrictions on this ability, including a minimum period of detention of at least six (6) months before a defendant charged with an indictable offense (i.e., a felony) can challenge their detention. Additionally, in order for a pretrial detainee to get a new detention hearing, they must first persuade the judge in their case that there is a “material” reason for the defendant to be released. When the judge makes this determination, the Court said, they should consider the following factors:

All of these factors may apply when the defendant merely wishes to petition the court for a new detention hearing. If the defendant wants to file a due process challenge and argue that continued detention during the pandemic would be an overly punitive punishment, the judge in the defendant’s criminal case should conduct a fact-sensitive inquiry that takes into account not just the above-listed factors, but also the health and safety risks posed to the public if the defendant is released from custody.

What Types of Criminal Charges Are Eligible for Release from Pretrial Detention during Coronavirus?

Generally speaking, pretrial detention exists to protect the public against defendants who pose a serious risk of danger, as well as to ensure that defendants who pose a risk of non-appearance will actually show up for trial. While it is rare for anyone charged with a disorderly persons offense (i.e., a misdemeanor) to be held as a pretrial detainee in New Jersey, it does occasionally happen. If a defendant is being detained on disorderly persons offense charges, they are eligible to seek a reopening of their detention hearing given the unique circumstances of the coronavirus pandemic.

The ability to seek release from pretrial detention is more limited for a defendant charged with a serious criminal offense that is classified as an indictable offense or felony, including first degree, second degree, third degree, and fourth degree crimes. First of all, these defendants will need to have been detained for a period of six (6) months or longer before they can file a motion to reopen their detention hearings. Additionally, defendants who are being held on a criminal charge subject to a presumption of detention under the NJ criminal code will probably not be able to file for a reconsideration of their pretrial detention. For example, a defendant charged with murder or any serious crime that carries the possibility of life imprisonment will not be eligible for a new detention hearing.

Want the Court to Reconsider Your Pretrial Detention in NJ? Get a Lawyer who can Argue Your Case

Overall, the New Jersey Supreme Court now allows a defendant who can meet the requirements set forth by the Court for reopening a detention hearing to seek relief due to the changed circumstances undoubtedly imposed by the COVID pandemic. Moreover, the Court said that these hearings should be conducted and reviewed in both trial courts and for pretrial detention appeals in an accelerated fashion. If you are seeking to challenge or request reconsideration for pretrial release from jail in New Jersey, contact The Tormey Law Firm at (201)-556-1570 today to talk to an experienced criminal defense attorney who understands how the NJ legal system works, and can help to expedite your case and get your pretrial hearing reopened or appealed as soon as possible. Our lawyers are available 24/7 to provide you with a free consultation.

For additional information, read the Directive from the New Jersey Office of the Courts.