Arrested for a Weapon at Newark Liberty International Airport

If you Accidentally or Knowingly Bring an Illegal Weapon to Newark Airport, Improperly Store a Firearm in Your Luggage, or Illegally Possess a Gun without a Permit, the Consequences in New Jersey can be Heavy. 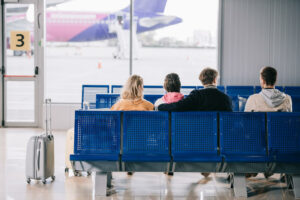 Unsuspecting travelers often find their plans derailed when arrested and charged with guns and other weapons at Newark Liberty International Airport. Whether entering or leaving New Jersey by way of Newark Airport (EWR), charges for a handgun, BB gun, stun gun, assault weapon, knife, or even something as supposedly trivial as handcuffs, can turn your trip into a nightmare. You may live in a state with permissive laws about buying and carrying weapons. However, state laws vary, so you must be aware of each state’s laws as you cross borders. New Jersey is especially extreme when it comes to gun laws, so protecting your rights requires a full understanding of what you can and cannot do when it comes to firearms and other weapons in this state. If you are flying to another state from Newark, New Jersey, or coming to the Garden State from elsewhere, airport rules and regulations are extremely important to know and follow. For example, passing through Newark airport with an unsecured weapon, according to Transportation Security Administration (TSA) regulations, can lead to weapons charges, imprisonment, fines, and a felony conviction. If you are traveling soon, review the airport security requirements and contact a knowledgeable New Jersey weapons defense lawyer if you have any doubt about bringing firearms or other weapons to the airport.

The Tormey Law Firm is a trusted resource on gun laws and rights, weapons offenses, and how to successfully defend people charged with crimes involving weapons in New Jersey. The firm has a long track record of defending clients arrested for guns and other weapons at Newark Liberty International Airport, which traverses boundaries from Union County in Elizabeth to Essex County in Newark. No matter where you got arrested at Newark Airport, whether inside the building or on the grounds of the facility, contact (201)-556-1570 now to talk to an experienced weapons lawyer who can assess and help with your situation.

Can you Fly out of Newark Liberty Airport with a Firearm?

Unloaded means neither the chamber nor the inserted magazine contains any bullets (49 CFR 1540.5). Ammunition must not be accessible for loading a firearm. In addition, secured has a specific context. It means fastened in a hard container, such as a case or other non-collapsible encasement that is not a duffel bag, backpack, or other soft bag. Moreover, fastened means no one can unlock the case but you, whether by key, combination, or additional security. In addition, you must declare each firearm in the bag at check-in at each airport you travel through with a gun or firearms in your baggage. You may have different rules to follow at various locations and fees to pay, too, so it is critical to ask at the airport what you must do. More importantly, it would help if you did your homework. Knowing the TSA rules for Newark airport will avoid a nightmarish arrest and trip delay.

Additional Restrictions and Regulations on Carrying Weapons through Newark Airport

You must also understand your responsibilities regarding the state you enter as soon as you leave the plane. For example, you may enjoy the benefits of a permissive state that allows open or concealed carry but may not know that the privilege is granted only to in-state residents or that you must wear a holster. Thus, retrieving your firearm from your luggage in another state’s airport may land you in legal trouble. Moreover, consult with the U.S. Customs and Border Protection for international travel rules and laws on firearms in your luggage.

Another agency to check with regarding the transportation of weapons is the New Jersey Port Authority, which has specific weapons rules for Newark Airport. For example, you cannot bring certain items into the airport, such as firearms, munitions, and explosives, including pyrotechnics. However, you may get prior approval from the Port Authority security to bring the items mentioned above into the airport or if you carry weapons to control an animal at specific authorized areas in the airport. You may also have a weapon if by police escort.

What happens when TSA finds a gun in Newark Airport?

If you are carrying a firearm on your person, have it in your carry-on, or a gun is improperly secured in your luggage, you may face charges for unlawful gun possession. Unfortunately, it is no excuse that you did not know you had the unlawful weapon in your carry-on, baggage, or on your person. Whether it be a handgun, BB gun, air gun, airsoft gun, rifle, shotgun, pellet gun, or assault firearm, all of these firearms can lead to severe penalties and an arrest at Newark Airport if TSA finds them.

Charged with Unlawful Possession of a Weapon at Newark Airport

Air, BB, or pellet guns are sources of third degree crime charges. However, illegally possessing a handgun, machine gun, or assault firearm is a second degree offense. For a third-degree crime, you are looking at three to five years in prison and a $15,000.00 fine. The penalty for a second-degree crime is far worse. You could get up to ten years in prison and pay up to $150,000.00 in financial penalties. Unlawfully possessing another type of weapon like a knife could lead to a fourth-degree indictable offense, for which penalties include up to 18 months of incarceration and $10,000 in fines.

What happens if Newark TSA finds a prohibited weapon?

Firearms are not the only weapons with airport restrictions. You may not bring certain items in carry-on luggage or anywhere in the airport. Illegal weapons, such as explosives, brass knuckles, nightsticks, certain knives, and destructive devices cannot enter the airport. Aside from high-capacity magazines and ammunition, you cannot bring silencers, handcuffs, gravity knives, and switchblades into the airport. Bringing illegal weapons to Newark Airport risks prosecution for violating N.J.S.A. 2C:39-3, the Prohibited Weapons and Devices Law. Conviction is likely for those who knowingly bring prohibited weapons into the airport. If airport authorities find the illegal weapon on you, they and a prosecutor will assume you willfully violated the law.

Having handcuffs is a disorderly persons offense. While a disorderly persons offense is punishable by a maximum of six months in jail and a $1,000.00 fine, it is still a criminal offense on your record. You face fourth degree charges if you have another type of prohibited weapon like a switchblade or brass knuckles, as well as other prohibited weapons like gravity knives.  However, sawed-off shotguns and destructive devices lead to more severe third degree charges. A fourth-degree crime carries a potential sentence of 18 months in prison and a $10,000.00 fine. As mentioned, third degree penalties range from imprisonment for 3 to 5 years and fines up to $15,000.

Charged with a Weapon at Newark Airport? Call Now to Talk to an Aggressive NJ Weapons Lawyer

Clearly, getting arrested at Newark International Airport with illegal weapons or improperly stored firearms or ammunition could mean long-term consequences in New Jersey that follow you wherever you live or plan to travel. Unfortunately, ignorance of the various laws, rules, and regulations on air travel through Newark or another transit hub in New Jersey is not going to prevent your arrest or prosecution for violating them. If you get caught at the airport or checkpoint by TSA or other authorities, you face some serious prison time that could change your life. Be sure you consult with a skilled NJ criminal defense lawyer with a concentration in guns and weapons laws if airport authorities catch you with a prohibited weapon or a gun in Newark.

There is absolutely no time to waste if the police arrest you or someone you love for violating airport rules and state laws regarding carrying firearms and other dangerous items. You want legal representation to advocate for a diversionary program like Pretrial Intervention, which can sometimes be achieved with help from a strong weapons lawyer with experience persuading a prosecutor to allow you to apply, and showing the court why they should accept you into the program. In PTI cases, you stay out of prison, submit to certain conditions during a period of supervision, and then have the charges dismissed. This can be tough to achieve in gun cases subject to the Graves Act, but certainly not impossible if you have a lawyer who knows how to do it. Even if you’re ineligible for PTI based on your criminal record, you may be able to serve your sentence outside prison on probation. In addition, there are valid reasons and strategies that can be used to beat guns and weapons charges outright, including when officials or law enforcement make mistakes or violate your rights in the process.

Contact The Tormey Law Firm to learn more in a free consultation. Send a message, contact us online, or call (201)-556-1570 to find out how confident attorneys can handle your Newark Airport weapons charges.

« What Makes Credit Card Fraud Distinct from Other Fraud Accusations in New Jersey
DRE Evidence is Sufficiently Reliable for Admissibility, According to Special Master »