Why Your Car May be Towed, Searched when Arrested in NJ 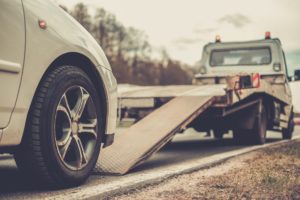 Police conduct traffic stops on New Jersey roadways virtually everyday. They notice someone driving too fast, failing to maintain their lane, making an improper turn, driving with a headlight out, driving recklessly, or otherwise committing a traffic violation and are quick to turn on the sirens. What you may not know until you find yourself in this situation, is that police can also search your car, impound the vehicle, and arrest you even if the stop was initiated for a minor traffic infraction. Law enforcement in New Jersey makes arrests during motor vehilce stops with astounding frequency. In some cases, they can even search your vehicle without a warrant and without your consent. Recently, a New Jersey Appellate Court decided a case that further affects the rights of thousands of New Jersey residents if they are subject to a traffic stop or DWI investigation.

According to this recent case, entitled State v. Rodriguez, police are not required to gain your consent or obtain a warrant to search your car if they spontaneously identify probable cause to believe that your vehicle contains evidence of criminal activity, even if the police already planned to tow your vehicle and conduct a vehicle inventory search at the station. The following explains the decision in State v. Rodriguez and its implications for drivers in New Jersey. If you have been arrested and are facing criminal charges resulting from a traffic stop in New Jersey, consulting a knowledgeable criminal defense attorney is very important when seeking the best outcome in your case. Our renowned New Jersey criminal defense lawyers at The Tormey Law Firm defend clients charged with unlawful possession of a weapon, possession of controlled dangerous substances like cocaine, heroin, prescription pills, and marijuana, and DWI in courts across the state. To discuss your specific case and receive a free consultation, contact us at (201)-556-1570 today.

In the aforementioned case, officers made a routine traffic stop and approached a Jeep belonging to a man named Juan Rodriguez. Rodriguez had been driving with a faulty headlight, among other minor violations. When officers approached his Jeep, they smelled marijuana and noticed small leafy pieces of marijuana on the Jeep’s seats (also known as marijuana in plain view). Officers requested that Rodriguez exit the vehicle. He complied. The police did not find any marijuana or evidence of a crime in his pockets or otherwise on his person. Officers then asked if they could search the inside of his Jeep. He said no. Officers searched the vehicle anyway. They found about twenty-seven pounds of marijuana in the back. The officers arrested Rodriguez and he was later charged with first degree possession of a marijuana with intent to distribute). The police called for a tow truck, removed the marijuana from the Jeep at the police station, and then conducted an inventory search of the car back at the station.

Then, in an unexpected twist of events, the trial judge in Rodriguez’s case suppressed the evidence recovered from his car, because the officers had not obtained Rodriguez’s consent to the search and because they had not sought a search warrant. The judge reasoned that this conduct violated the Fourth Amendment’s ban on warrantless searches and seizures. This effectively ended the case without a finding of guilt. The prosecution appealed, and a New Jersey Appellate Court took up the case.

The appellate court reversed the trial court’s order suppressing the evidence. The appeals court stated that officers are not required to seek a search warrant to search a car if they spontaneously develop probable cause to believe that the car contains evidence of illegal activity, even if officers will obviously have to later tow the car to a station and impound it. This is significant because, previously, some courts and defense attorneys had reasoned that if a vehicle will be transported back to the station and impounded, officers have plenty of time to obtain a search warrant, and thus a warrantless roadside search without consent is unnecessary and violates the Fourth Amendment’s bar on warrantless searches and seizures.

When Officers Can Search & Tow Your Vehicle in New Jersey

This recent appellate decision has significant implications for all New Jersey motorists and anyone planning to drive through the state. Under the court’s recent interpretation of New Jersey law, police may search your vehicle even if you do not consent and even if they do not have a warrant, provided that they happened upon evidence giving them probable cause to believe your car contains evidence of a crime. This ruling is particularly significant in DWI cases, since police inevitably tow the vehicle of anyone arrested for drunk driving in New Jersey and keep the car in police custody for at least 12 hours.

Before this case, defense counsel could argue that if police had already arrested a car’s driver and planned to tow a car, officers had plenty of time to get a warrant, and thus courts should not permit warrantless searches performed without consent and should suppress all evidence recovered from such searches. After Rodriguez, courts may take a dim view of this argument, and defense counsel will have a more challenging time moving to suppress evidence uncovered in warrantless searches of vehicles at DWI and similar traffic stops.

Consult a Lawyer about the Best Defense for Your NJ Charges

If police recovered evidence from a traffic stop that they are using against you, you will benefit from working with a skilled criminal defense attorney who is familiar with these up-to-the-minute decisions issued by New Jersey courts. Our firm concentrates solely on criminal law so that our attorneys can master the nuances of this complex area and remain abreast of new precential cases as they evolve. Contact us today to discuss your case with a New Jersey criminal defense attorney who knows how to adapt your defense and fight to achieve the best possible results.