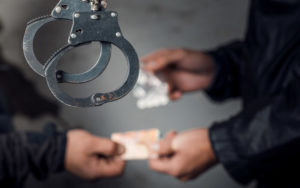 Garfield is a small town with a community feeling, relatively safe, but not without crime. The odds of becoming a victim of property crime is greater than average and Garfield police regularly arrest people for drug crimes, including distribution, manufacture, and possession of controlled dangerous substances (CDS). While its proximity to New York city is an alluring feature, it can also be a liability. The influx of city crime reaches the doorstep of Garfield in the form of cocaine, MDMA, heroin, marijuana, fentanyl, and other street drugs that grip the lives of many struggling amidst substance abuse and eventually, the criminal justice system. There are also numerous individuals who have run-ins with law enforcement and wind up charged with illegally possessing prescription drugs like Oxycontin, Xanax, and Percocet. If you have been arrested for drug possession in Garfield, there are laws and procedures you should understand. Depending on the type, amount, and location, possessing a controlled dangerous substance can result in six months to five years in jail, high fines, a license suspension, community service, and more if you are suspected of possessing drugs with the intent to sell. Fortunately, our Garfield drug possession lawyers at The Tormey Law Firm have run across countless drug cases over the course of our lengthy careers providing criminal and DWI defense. To discuss your specific CDS charges and how we can be of assistance at this critical time, call (201)-556-1570 now. The consultation is always provided at no cost to you and an experienced attorney is here to assist you.

Under New Jersey Annotated Statutes section 2C:35-10, it is illegal to knowingly possess a controlled dangerous substance, or comparable substances, without authorization. Controlled dangerous substances include street drugs, like heroin, methamphetamine, LSD, or cocaine, as well as unprescribed prescription drugs, like Adderall. Possessing more dangerous drugs, including heroin, cocaine, synthetic marijuana, ecstasy and the like, are third degree indictable crimes with sentences of up to five years in jail and up to $35,000.00 in fines. Possessing Schedule V drugs, over the counter drugs, and 50 grams or more of marijuana or 5 grams or more of hashish is a fourth degree crime with penalties of up to 18 months in jail and a $10,000.00 fine, or for marijuana and hashish, fines up to $25,000.00.

For amounts below the 50 grams of marijuana and 5 grams of hashish mark, the penalty can be as high as six months in jail and a $1,000.00 fine for a disorderly persons offense. Possessing drugs on or near school grounds adds minimally 100 hours of community service to any sentence and knowingly possessing illegal substances without turning them over to law enforcement can add an additional charge for a disorderly offense, which compounds the sentence. Each separate offense may add more time and money to your sentence if you are ultimately rendered guilty.

Do I have to Have the Drugs on my Physical Person to be Charged with Possessing CDS in Garfield NJ?

Here is another point to consider. To be convicted of drug possession charges, you do not have to have the drugs on your person when the police find them and arrest you. They can be in your car, in your house, or in the vicinity of wherever you are, meaning the illegal substances are evidently under your control and you know they are illegal.  For example, if the police find marijuana in the glove compartment of your car, you can be charged with constructive possession if it is evident that you knew marijuana is illegal and that the car is registered to you. The circumstances of the possession may show the drugs were yours, as you had the exclusive or shared control over them.

Charged with Possession of CDS in Garfield, Where will I go for Court?

The type, amount, and location of illegal substance possession also matters as to where your case is prosecuted. If charged with a disorderly persons offense, your case is prosecuted by the Garfield Municipal Court prosecutor, who may be willing to negotiate your offense down to a lesser charge or sentence like probation, with the help of a good criminal defense attorney. You may also receive a conditional discharge for first time offenders. Indictable crimes are heard in Bergen Superior Court, where your attorney may help you ensure that the prosecutor has legally obtained evidence against you and that police have not violated your Constitutional rights. A strategic lawyer may also negotiate a lesser offense or lighter sentence. You may also be able to get your drug charges dismissed, especially if it is your first offense. For instance, you may qualify for the Pre-Trial Intervention (PTI) program for first offenders. Both in Municipal and Superior court, alternatives to conviction and a criminal record may be available to you, it’s knowing how to find and achieve them that is the art of matter.

Speak with a Garfield Drug Possession Defense Lawyer about Your Charges

Connect with a Garfield drug possession defense attorney to find out the ways to successfully handle your charges. Undoubtedly, there are better options than conviction and stiff sentences that may come after being arrested for possession of CDS. Whether you are facing a single drug charge or several in the City of Garfield, The Tormey can help. Contact our office at (201)-556-1570 for a free consultation.