Crimes Committed by Non-Citizens in New Jersey: What can Get You Deported

What Happens when a Non-Citizen Gets Charged with a Crime in NJ? 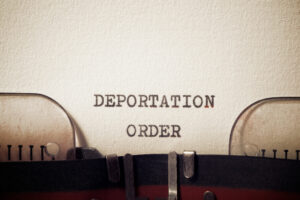 If you commit a crime as a non-citizen in New Jersey, you may jeopardize your standing to become one and even get deported, depending on the offense. Title 8 of the U.S. Code categorizes which crimes can result in deportation, and the United States Department of Homeland Security oversees immigration enforcement. Other federal agencies, like the U.S. Customs and Border Protection (CBP) and Immigration and Customs Enforcement (ICE), are responsible for arresting and detaining a non-citizen criminal suspect at the border or inside the U.S. However, ultimately, the accused’s fate rests with a federal immigration court judge. Immigration courts, organized under the Executive Office for Immigration Review (EOIR), interpret immigration law to resolve non-citizen cases, including deportations. However, not all criminal behaviors result in deportation. Only crimes that deceive, damage, or threaten the public welfare and trust are typically deportable. Here, we will delve into what happens when non-citizens get arrested in New Jersey, what crimes make you eligible for deportation, and the avenues that you can pursue to avoid conviction and deportation. If you have questions about criminal charges and deportation or need representation in criminal court to defend against a conviction that may impact your immigration status, contact our New Jersey defense attorneys for immediate assistance. You can reach us anytime at (201)-556-1570 for a free consultation.

Can Non-Citizens Get Deported for Criminal Charges in NJ?

If you are not a U.S. citizen but your status subjects you to deportation, such as green card or visa holders in the United States, you could be deported for being convicted of certain crimes (8 U.S.C. 1227). The Immigration and Nationality Act (INA) and the Illegal Immigration Reform and Immigrant Responsibility Act of 1996 (IIRAIRA) identify deportable crimes. Typically, an immigration official discovers a criminal conviction or arrest upon reviewing applications for benefits, status changes, green card issuance, or visa renewals. The U.S. Citizenship and Immigration Services does criminal background checks for immigrants applying for green cards. The criminal background also appears when CBP or ICE officers review documents of non-citizens re-entering the country.

What Crimes are Deportable in NJ?

Deportable crimes are crimes intentionally committed against individuals or the public. Likewise, aggravated indictable crimes, like murder, kidnapping, and aggravated assault, are more likely to lead to quick deportation. The U.S. also takes drug crimes, gun crimes, and domestic violence crimes very seriously, as all three typically lead to crimes of moral turpitude. In fact, the worse the crime, the quicker the deportation usually occurs. For example, crimes against the nation and national security are considered serious threats that warrant removal under immigration laws.

Crimes of moral turpitude may be indictable or disorderly persons offenses, including prostitution, theft, DUI, welfare fraud, voluntary manslaughter, and money laundering. If an ICE official discovers an arrest or conviction for crimes considered base or vile by one who has been in the United States less than five years, they may begin deportation proceedings. Besides base and vile, other actions deemed reckless, evil, shocking, depraved, immoral, indecent, or unconscionable regarding public duty and social responsibility are deportable. And a non-citizen convicted of multiple crimes or a single crime of moral turpitude face deportation. In addition, domestic violence, such as aggravated assault, stalking, contempt of a protective order, and child neglect or abuse are also crimes of moral turpitude. However, even a disorderly persons offenses in New Jersey, like shoplifting less than $200.00 worth of merchandise from a store, could be grounds for deportation.

Offenses Less Likely to Result in Deportation for Immigrants Convicted

Petty offenses punished by less than six months’ jail time, on the other hand, may not invoke deportation proceedings. Another exception to deportation for crimes of moral turpitude crime is a conviction or arrest over five years old for a legal immigrant and ten for permanent residents. Less than 30 grams of marijuana may not get you deported, though it may get you stopped at the border trying to re-enter the country. Overall, lesser offenses that are not crimes of moral turpitude are less likely to spark deportation proceedings and are, in fact, possible exceptions to deportation. An immigration judge can waive deportation if the non-citizen is not a public safety threat. They may escape deportation under the INA if their conviction for a crime of moral turpitude is older than 15 years when their visa or green card application or deportation is sure to cause extreme hardship to a U.S. citizen’s or permanent resident’s family member. Additionally, a reformed prostitute or other convicted criminal associated with prostitution may obtain a deportation waiver at a judge’s discretion. Lastly, juvenile crime records unrelated to aggravated crimes may not cause an adult’s deportation.

Non-Citizen Charged with a Crime in NJ, Can You Avoid Deportation?

The best way to avoid deportation is to avoid conviction or seek a lesser charge that may avoid deportable criminal convictions, like downgrading or pleading to a non-deportable offense. Of course, overstaying a visa or entering the country illegally does not require a conviction to remove a non-citizen from the U.S., unless an ICE prosecutor offers prosecutorial discretion, meaning a pass for the time being. The prosecutor can recommend closing the deportation case, which does nothing about the individual’s illegal status. Plus, they can still be detained later and deported for a criminal offense. If a judge orders deportation, an immigration attorney can help an individual appeal the decision to the U.S. Board of Immigration Appeals within 30 days.

Immigration violations and appeals aside, an experienced criminal attorney can carefully negotiate convictions for non-citizens charged with crimes, defend them against a conviction that may result in them being deported, and handle the case from immediately after the arrest through motions, plea negotiations, and potentially trial. However, if avoiding conviction or reducing the charges is not an option, an individual facing deportation may move the sentencing court to vacate their conviction or reduce it to an immigration-neutral offense. Thus, you may want to hire a criminal defense attorney to ensure your immigration status is not affected by your arrest and conviction. Alternatively, you may want an experienced immigration attorney to help you defend against removal based on a crime committed.

Arrested in New Jersey and Worried about Being Deported?

Being arrested and charged with a crime in New Jersey can be dire straits if you are a non-citizen. Depending on the criminal charges against you, your immigration status may be in jeopardy. Worst case scenario, if you have been charged with a crime of moral turpitude, serious aggravated felonies, domestic violence, or firearms and drug charges, a conviction could mean your deportation. Ultimately, the stakes become incredibly high for people accused of committing crimes who do not have U.S. citizenship. The number one priority for you now should be to aggressively defend against the criminal charges you’re facing and do everything in your power to prevent being convicted. If you have a criminal case as a non-citizen in New Jersey, contact The Tormey Law Firm to speak with an accomplished New Jersey criminal defense lawyer regarding your situation. We offer free consultations around the clock. Call (201)-556-1570 today.