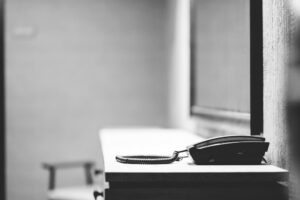 The United States Constitution does not specifically state that individuals have a right to privacy. However, a long line of Supreme Court cases has carved out a right to privacy from the Bill of Rights. For example, Supreme Court cases have determined that the police cannot wiretap your home telephone without a warrant, cannot frisk you in the street for evidence of crime without probable cause and a warrant, nor can they police the bedroom for contraceptive use. Also, certain relationships contain legal privacy privileges, like doctors and patients, priests and penitents, and lawyers and clients. People expect to confide in these professionals and not have their confidences exposed to the public or used against them in a court of law. And in certain places and situations, the ordinary person can expect that their conversations are private, one of those being the police station telephone call an arrestee makes, even though the police record the call.

In a recent New Jersey Supreme Court case, State v. McQueen, the defendant’s police station telephone conversation was deemed private and not admissible evidence to support the prosecutor’s case against the defendant. McQueen made two phone calls, one from the police station and one from jail. Both recorded phone calls contained damning evidence of the location of a gun and the attempt to hide it. The defendant discarded the weapon when eluding the police at a traffic stop. McQueen’s lawyer filed a motion to suppress the contents of the telephone calls, alleging that the police collected both phone call recordings and gave them to the prosecutor against the Wiretapping and Electronic Surveillance Control Act and the U.S. Constitution’s Fourth Amendment against illegal search and seizures. The superior court judge agreed.

The Fourth Amendment anticipates a right to privacy from government intrusion when no evidence of a crime exists. That means that the police cannot go looking for criminal evidence in your car, at your home, or on your person without some reason to believe that a crime has taken place or will take place. So, for example, the police cannot stop you on the street because you “look like a criminal.” They may stop you if you look drunk since that may be evidence of a crime or infraction. Many municipalities have ordinances against being drunk in a public place. But even if they could stop someone who looks drunk, they cannot frisk the person for a gun without a reason or probable cause to believe that the person is involved with a crime or is illegally carrying a weapon. The Fourth Amendment protects people from intrusions, such as searches and seizures of the property or person without probable cause and a warrant to do so.

Important Things to Keep in Mind when Calling Someone from Jail

The New Jersey Supreme Court ruled that the recorded phone call from the police station was a seizure in violation of the Fourth Amendment. However, the jail telephone call recording was not private and could be used as evidence in a court of law and presented to a grand jury. All New Jersey jailhouses record telephone calls and inmates are made aware of that fact in writing and recorded messages at the start of each telephone call. The Correctional Center where McQueen made the phone call informs inmates that the facility may use recorded phone calls to prosecute them. As such, phone calls in prisons and jails do not fall under the protections of the Wiretapping Act. The Act requires law enforcement to file the proper warrant paperwork based on probable cause that a crime is occurring or about to occur to enable them to wiretap someone’s private telephone conversation.

The same is not valid for the police station phone call when McQueen expected privacy. There was no message notifying him that the police recorded his phone call or that they could use it against him. In fact, his expectation of privacy was evident by the way he behaved during the phone call: speaking softly into the phone so that no one could hear him. Accordingly, the Court held that the prosecutor could not seize the station telephone conversation recording without a warrant, as it violated the defendant’s Fourth Amendment rights against illegal searches for and seizures of criminal evidence.

The Supreme Court’s Fourth Amendment protection against illegal search and seizure by the police discussion hinges on an individual’s reasonable expectation that they may go about their daily lives in privacy without unexpected and uncalled-for police intrusion. Since the police did not obtain a warrant to take the recordings and turn them over to the prosecutor, they violated the defendant’s Fourth Amendment rights. Even though police already arrested him, he was not yet convicted and, thus, presumed innocent. Without notice that his conversation was not private, McQueen could reasonably believe that his telephone call was confidential and not subject to police seizure.

Defending the privacy rights of criminally charged individuals is what criminal defense lawyers do. Our primary concern in each new case is to examine whether the police or prosecutor infringed the defendant’s rights. Defense lawyers protect individuals’ constitutional rights before and after arrest, including the right not to speak to the police and to have an attorney. We ensure the police follow the laws that protect individual rights against unbridled authority and limitless interference in people’s lives. Warrants protect individuals and check police power. We prevent police from randomly collecting damning information about people without their knowledge on fishing expeditions and then being allowed to use that in the prosecutorial stage of a criminal case because we require judges to examine whether police have reason to investigate someone and seize property from them, as well as how this was carried out.

The Fourth Amendment’s presumed right to privacy is critical for criminal defense attorneys, as prosecutors cannot use illegal evidence against a defendant. As is evident from State v. McQueen, everyone has the right to be free from police misconduct that violates the constitution. The Supreme Court affirmed the defendant’s motion to suppress the police station recording.

Criminal Attorneys are one of the Essential Privacy Protectors.

So, suppose the police arrested you for a crime. In that case, you want to tell your attorney everything that occurred before, during, and after your arrest, so your attorney can be sure the state did not violate your privacy and other constitutionally protected rights. Contact the distinguished team of NJ criminal defense attorneys at The Tormey Law Firm at our local office nearest you for a free consultation before you speak to the police. We regularly meet people in jails throughout New Jersey to protect their rights when accused of crimes in Bergen County, Middlesex County, Passaic County, Morris County, Essex County, Union County, and Somerset County. Your liberty may depend on it.

« License Plate Violations Leading to Traffic Stop Have Limits, NJ Supreme Court Says
Buying Weed is Legal in New Jersey, But Where and When? »