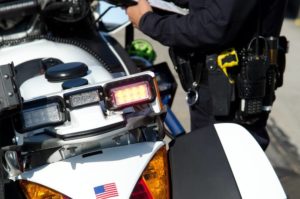 In Kansas v. Glover, the United States Supreme Court expanded an officer’s authority to lawfully stop an individual under the Fourth Amendment. In this case, the Supreme Court was asked to determine whether it was permissible to conduct a motor vehicle stop after running the driver’s license plate and subsequently learning that the registered owner of the vehicle has a suspended license.

The facts of the case are very simple and straightforward. In fact, the circumstances were so simple and uncontested, neither the arresting officer nor the defendant testified at the suppression hearing. Rather, the parties stipulated to the following facts. The officer who stopped the vehicle was on routine patrol where he observed a 1995 Chevrolet 1500 pickup truck with a Kansas license plate depicting 295ATJ. He ran the plate number and learned that the truck was registered to the defendant, Charles Glover, Jr., who had a revoked driver’s license. The officer assumed that the registered owner was driving the vehicle and consequently, initiated a traffic stop.

Mr. Glover filed a motion to suppress and asserted that the stop was unlawful because it was unreasonable for the officer to automatically assume that he was driving the truck. The trial court agreed and granted the motion. The State appealed the decision and the Court of Appeals reversed. The case was then reviewed by the Kansas Supreme Court, who reversed the Court of Appeal’s ruling. The case was eventually reviewed by the United States Supreme Court, which issued an 8-1 decision upholding the motor vehicle stop as lawful.

The majority opinion was authored by Justice Clarence Thomas, who held that the Fourth Amendment of the United States Constitution allows a police officer to conduct a traffic stop if the officer has reasonable suspicion that a crime was committed, or a traffic infraction occurred. Justice Thomas went on to emphasize that reasonable suspicion is not a demanding standard and can be supported by common sense inquiries. With that in mind, the officer who conducted the motor vehicle made a common-sense inference that the registered owner of the car was probably driving it and therefore, it was reasonable to suspect that he was driving it without a license.

To bolster his ruling, Justice Thomas also referenced studies surrounding the frequency that unlicensed drivers continued to drive alongside Kansas’s legislative scheme concerning unlicensed drivers to support his conclusion that it was not unreasonable for the officer to believe that the defendant was operating his truck. The cited studies indicate that it is common for individuals with suspended driving privileges to continue to drive while their license is suspended. Concurring with those studies and recognizing the propensity of repeat offenders, Kanas has passed laws and imposes penalties for people who continue to operate their vehicle when their license has been revoked. According to Justice Thomas, the studies and corresponding legislation help demonstrate that the officer’s inference that the defendant was driving his car with a suspended license was reasonable. Therefore, the stop was lawful and did not violate the Fourth Amendment.

The only dissenting opinion was Justice Sonia Maria Sotomayor. She was not persuaded by the majority’s decision and stressed that the Fourth Amendment demands individualized suspicion. It is not enough that the police determined that the defendant had a suspended license and statistics show that many citizens drive with a revoked license. The arresting officer must be able to point to specific facts that tend to show that the defendant was operating his vehicle. The police cannot stop individuals simply based on hunches and because the officer guessed that the owner of the car was driving, it was an unlawful stop.

Can Police Stop Your Car based on a License Check in New Jersey?

New Jersey has repeatedly addressed a similar issue related to license plate checks and our courts have consistently held that the police may randomly investigate a person’s license plate. The inspecting officer does not need probable cause or reasonable suspicion to search a driver’s plates. The rationale upheld by our Supreme Court is twofold. One, the State of New Jersey has a strong interest in keeping its highways safe by ensuring that only qualified drivers are permitted to operate vehicles. And two, running a license plate check is not a search within the meaning of our constitution. Because license plates are visible to the public, the police are not intruding upon a person’s reasonable expectation of privacy and therefore, the inquiry is not deemed a search in the constitutional sense.

When an officer enters a vehicle’s license plate number, the Department of Motor Vehicles produces the following information. It provides the registrant’s name, date of birth, address, and driver’s license number. The DMV further divulges the vehicle’s year, make, model, license plate number, identification number, number of owners, and the expiration date for the registration. Additionally, the officer can view whether the license or registration is suspended, the driver’s license expiration date; the number of points accrued against the license; and the number of endorsements and restrictions on the license. Furthermore, by entering the owner’s name, an officer can further learn whether that individual is wanted by state or federal authorities and lastly, if the officer is able to enter the car’s identification number, the officer can determine whether the vehicle was reported stolen.

Accordingly, a license plate inquiry can uncover a lot of information and in turn, can provide an officer with a lengthy list of reasons to stop your car. Therefore, it is important to understand your rights when you are approached by a police officer. To start, the police may stop your vehicle if they believe you committed a traffic infraction or criminal offense. Additionally, the police may ask the driver to exit the vehicle, however, with respect to any passengers, the police must establish a separate reason outside the reason for the stop to lawfully remove a passenger. Further, authorities may search the inside of your car without a warrant if they have probable cause to believe there is criminal activity afoot or the inside of the vehicle contains contraband. Lastly, many automobile searches are upheld because the driver consented to the search. You do not have to consent. There is no law, statute, or rule that obligates a driver to consent to a search of their car.

If you have further questions about driving with a suspended or revoked license in New Jersey, or you are facing charges resulting from a motor vehicle stop, the skilled criminal defense lawyers at The Tormey Law Firm are here to assist you. Simply call (201)-556-1570 or contact us online for a free consultation. A member of our team is always available to discuss your case and provide answers.