Can You Refuse to do a Field Sobriety Test in NJ?

You may be surprised to know that you can say no if you are stopped and asked to take a field sobriety test. No law in New Jersey requires you to take one. 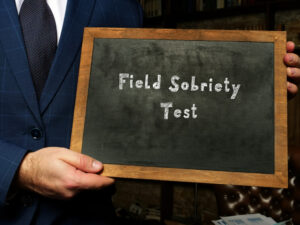 You can politely refuse to take one not to aggravate the officers and give them a reason to arrest you. But that does not mean that you can escape a DWI. It just means that the police cannot provide evidence of a failed field sobriety test to the prosecutor to prove you are guilty of a DWI. However, a prosecutor can still prove you operated a vehicle while intoxicated by other evidence, including the police officer’s observations of your driving and demeanor before and during the vehicle stop. Moreover, a police officer may arrest you even if you pass a field sobriety test if they believe you may be a danger to others on the road with any alcohol or drugs in your system.

While most DWI convictions result from blood alcohol concentration proof, a judge can still convict you of a DWI on evidence of your inability to operate a motor vehicle safely due to alcohol or drug impairment. Evidence to prove a DWI can come in forms other than a breathalyzer readout. One such piece of evidence is field sobriety test outcomes. So, if a police officer stops you for suspicious driving or a traffic violation, an officer can require you take a field sobriety test on the spot. You may refuse, but if you do submit to the test, perhaps believing you did not drink enough to fail the test, know that you run a risk, especially if you take the test immediately after the stop. The reliability of the field sobriety test outcome depends on the immediacy of the test. Still, if you fail the test or refuse to take the test, the police can arrest you. After arrest, you must submit to a breath test due to New Jersey’s implied consent law. Otherwise, you risk being charged with DWI Refusal NJ 39:4-50.4a.

The first test is the one-leg stand. Verifying that the driver understands each instruction, an officer should instruct and demonstrate standing upright, with feet together and arms alongside the body as the starting point. Then, the officer teaches and shows a leg lift of about six inches, toes pointed forward, holding the raised leg for about 30 seconds or less. The driver is to keep their eyes on the lifted foot. Then the officer notes any swaying, leaning, hopping, or losing balance. Putting the foot down three or more times indicates the driver’s inability to maintain the posture and likelihood of intoxication. Finally, the officer must warn the driver that they should lift their leg again to continue the test if their foot touches the ground.

The second test is the walk and turn test that must proceed like the one-leg lift, with clear instructions, demonstration, and verification of the driver’s comprehension of the instructions. With arms at their side, the suspect puts their right foot in front of their left toe to heel. Then they walk a line they must watch while performing the test. They must take nine steps forward, heel to toe, turn around by using one foot to semi-circle around in the opposite direction, then walk the nine steps in the other direction, all while counting the steps out loud. The inability to walk on the line, follow directions, keep count, balance without arms, and stay upright are signs of intoxication.

And the horizontal gaze nystagmus test is the third. This one consists of the driver following an officer’s finger or other designated tool with their eyes as the officer moves the focal point side to side slowly, about two seconds from the center to one side. The officer checks their ability to follow the finger or other object without involuntary eye movement or nystagmus, testing the driver’s ability to track a moving object. The other tests are about 60% to 70% accurate at approximating a blood alcohol content of .08% or more. However, all tests are only as good as the test giver.

Similarly, DUI checkpoints, though lawful, must comply with the legal limitations. First, the police should target a specific area, time, and place, with proper notification to drivers that the checkpoint exists by signs and a lit area at the checkpoint. In addition, the police must have established criteria for stopping or waving through a vehicle. It cannot be arbitrary or purely discretionary. And the checkpoint itself must be authorized by a supervisory agency or individual with advance reporting on how the checkpoint will be set up and run. In other words, the police cannot randomly decide to set up a checkpoint on their own. And when they stop a car, the driver is asked to answer questions about where they are going and supply their paperwork, such as license, registration, and insurance proof. Then, if an officer suspects a driver is intoxicated, they can pull them aside and give them a field sobriety test.

Thus, whether your arrest occurred after a checkpoint field sobriety test or after a field sobriety test at another location, an experienced DWI defense attorney reviewing your case may find many avenues of attacking the field sobriety test results. For example, a DUI lawyer might ask you if you took the test right outside your car or at a distance from the vehicle at an initial interview. If the latter, a skilled attorney may cross-examine a testifying police office if they observed you walking to the designated field sobriety test location. If you made it to the testing site without stumbling or needing assistance, the officer might have a tougher time convincing a judge that you failed the test. Your attorney can also ask detailed questions about the officer’s instructions, whether they demonstrated the tasks to be performed, and verify your understanding of what you were to do. They can assess the validity of a DWI checkpoint. The can review any video of your stop and what happened thereafter. And, more importantly, they can ascertain your health conditions at the time that you took the test. Many conditions might interfere with balance or your ability to track a moving object with your eyes.

Even a cold can affect someone’s ability to perform the one-leg lift as congestion can affect the inner ear that governs balance. Medical conditions, such as vertigo, diabetes, infections, vision problems, and muscle or joint pain, as well as medications, can likewise affect balance and eye movement. And if you are a senior adult or obese and an officer asked you to take a field sobriety test, so many factors may invalidate a field sobriety test result. Moreover, the ground conditions that you took the test on and the shoes you wore may affect the test outcome. So, wearing rubber-soled shoes on a damp, hard surface may affect your ability to walk a straight line or balance.

What Happens if You Decline a Field Sobriety Test in New Jersey?

Suppose yor refused to submit to a field sobriety test. In that case, you may have avoided failing the test and supplying evidence to the prosecutor that you had too many alcoholic drinks before the police stopped you. However, you may not have prevented the police from gathering evidence to support a DUI/DWI, as they can still require you to take a breathalyzer. It is illegal to refuse a breathalyzer test, and your submission to the test is a condition of the privilege of driving on public roadways. If you do take the test, however, the advantage is that an excellent DWI attorney can potentially find multiple ways to invalidate or weaken the evidentiary weight of the test. Ultimately, there are a vast array of strategies to a beat a DWI.

What you need to do is talk to a highly credentialed and battle-tested DUI defense attorney who can examine your case and find the openings that can be used to get your driving under the influence charges dismissed. The Tormey Law Firm has a team of attorneys who have been doing this for years with tremendous results. Contact (201)-556-1570 if you would like a free consultation about your drunk or drugged driving arrest.

« What Police Can and Cannot ask of a Passenger in a Vehicle
As Marijuana Looms, New Jersey Awaits Testing for Driving Stoned Decision »