Fentanyl Use is on the Rise: Here’s Why it can get you Arrested in New Jersey

Facing Charges for Fentanyl in NJ? 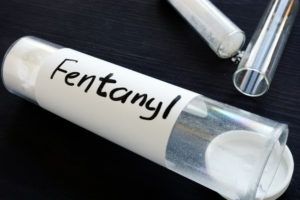 Fentanyl, an extraordinarily dangerous synthetic drug that can be 50 to 100 times more potent than morphine and 25 to 50 times more potent than heroin, has become the foremost word linked to the national opioid crisis. The concern and uproar over fentanyl has been driven primarily by the number of drug overdoses involving this powerful opioid since it became part of the illegal drugs market. In fact, a recent report from the CDC stated that deaths in the United States associated with fentanyl have increased by over 1,000% between 2011 and 2016.  Along with the drastic increase in fentanyl fatalities, New Jersey has cracked down on crimes associated with fentanyl abuse. People who illegally possess, sell, and obtain fentanyl may be arrested and face criminal charges for possession, intent to distribute, and forging a fentanyl prescription. The legal consequences of fentanyl charges are severe. You can be sentenced to lengthy jail time, heavy fines, and be forced to cope with the effects of having a criminal record. If you find yourself facing fentanyl charges in New Jersey, contact our experienced NJ drug defense lawyers for help fighting your case. You can speak with an attorney free of charge anytime by calling 201-556-1570 or reach out to us online to arrange a free consultation.

Fentanyl is listed as a Schedule II drug by the New Jersey Controlled Dangerous Substances Act and by the federal Drug Enforcement Administration. It is also known by brand names like Actiq, Duragesic, Subsys, Innovar, Fentora, and Sublimaze. While fentanyl is technically legal when prescribed by a licensed physician, it can also expose you to severe consequences if you have been arrested for a fentanyl charge. Two common fentanyl related offenses in New Jersey are possession of fentanyl and distribution (possession with intent to distribute), which can entail harsh penalties.

Possessing up to 4 doses of Fentanyl without a valid prescription is a fourth degree crime. This indictable offense carries penalties consisting of up to 18 months in a New Jersey State Prison and thousands of dollars of fines. Carrying between 5 and 99 doses of fentanyl is a third degree crime, carrying much steeper fines and potentially years of jail time. 3rd degree possession of fentanyl is punishable by between 3 and 5 years in prison. Further, possessing over 100 doses of fentanyl with intent to distribute is a second degree crime. A 2nd degree fentanyl charge has even steeper penalties, including between 5 and 10 years in jail and fines amounting to hundreds of thousands of dollars.

Fentanyl is associated with additional charges beyond simple drug possession or possession with intent to sell. Obtaining fentanyl through forgery, theft or prescription fraud can be an indictable offense. In addition, driving under the influence of fentanyl, if you have taken enough of the drug to make you drive less safely than a sober person, can result in loss of driver’s license and time in jail. If you are charged with any of these crimes, it is highly advisable for you to consult an experienced New Jersey criminal defense attorney as soon as you are able.

If you have been charged with a Fentanyl offense in New Jersey, it is vital to enlist the help of a knowledgeable attorney who can defend your innocence. The team of highly skilled NJ criminal defense lawyers at The Tormey Law Firm are ready to attack the case against you with the best defense. We represent clients facing drug charges in Bergen County, Morris County, Essex County, Passaic County, and throughout New Jersey with the sole purpose of delivering the best possible results. To discuss your fentanyl related charges with an experienced lawyer, call 201-556-1570 for immediate assistance.

Fentanyl Deaths and Overdoses by the Numbers

Shockingly, individuals in the United States are more likely to die from drug overdoses than car accidents. Over 70,000 citizens died of such overdoses in 2017 alone. Many of these deaths occurred and continue to occur each year in New Jersey. Fentanyl was involved in approximately 29% of all drug overdose deaths nationally in 2016, making it easily the deadliest drug in the United States.

According to the Centers for Disease Control, between 2011 and 2012, fentanyl deaths held steady at around 1,600 fatalities per year. 2013 saw a modest increase in fentanyl overdose fatalities, clocking in at 1,900.  Then things began to change rapidly. In 2014, deaths related to fentanyl doubled year over year. 4,223 deaths were recorded in 2014.  2015 saw 8,251 fatalities.  And 2016 saw fentanyl deaths jump to a mind-numbing 18,335 deaths. Fentanyl deaths affected men and women at roughly equal rates from 2011 through 2013, but from 2016 onward, men started dying from fentanyl overdoses almost three times more often than women did over the same time period. The increase in these deaths grew most quickly among people aged between 15 and 34.

Caucasians suffered from the highest number of fentanyl deaths of any demographic group. With that said, between 2011 and 2016, African Americans saw a 140.6% annual increase in fentanyl fatalities and Hispanics saw an increase of 118.3% during each of those years. Overall, fentanyl was the drug most commonly associated with deaths due to overdose, according to the National Center for Health Statistics.