Driving under the Influence with Prescription Drugs in NJ

Charged with Driving under the Influence of Prescription Pills in New Jersey? 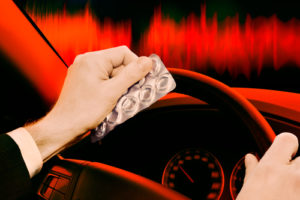 Thousands of people across New Jersey take prescription drugs to treat various conditions. Carisoprodol or Soma for back pain. Xanax or alprazolam for anxiety. Seroquel or lithium for schizophrenia or bipolar disorder. An amphetamine—Adderall, Ritalin, or Dexdrine—to treat ADD or ADHD. In short, prescription drugs are everywhere. And, although shockingly few people know it, driving on them can be illegal.

Combining prescription drugs with even a small amount of marijuana, alcohol, or even over-the-counter cold or flu medicines like Nyquil can cause you to display symptoms that would shock you if you were to see them on video. And police agencies are training and deploying more and more specialized officers, known as Drug Recognition Experts, to apprehend drivers impaired by drugs, prescription or otherwise. Drug arrests have been rising rapidly in New Jersey and nationally as a result. More information about criminal charges that can be brought in connection with driving on prescription drugs in New Jersey is provided below. For information that applies to your specific case, call the experienced New Jersey Criminal Defense Lawyers at our firm anytime at 201-556-1570. We defend clients charged with drug DUI, illegal possession of prescription drugs, and other criminal charges in courts throughout the state on a regular basis. Contact us for a free consultation over the phone or make an appointment at one of our convenient office locations in Hackensack, Morristown, Newark, Middletown, and New Brunswick.

New Jersey Revised Statute § 39:4-50 prohibits driving while intoxicated and under the influence of drugs. Most people are aware that this law exists in some form or another, and most people associate driving while intoxicated with driving with a blood alcohol level of .08 or more. But the New Jersey DWI law criminalizes much more than that. The statute prohibits driving while impaired by any narcotic or habit-producing drug, and several of the prescription drugs listed above qualify as habit-producing drugs under New Jersey law. If a prescription drug prevents you from driving properly and if you drive on that drug, you may be arrested and charged with violating NJSA 39:4-50.

Accused of Being Under the Influence of Medication in NJ

If you drive while impaired by any of these drugs, you may be arrested for not only driving under the influence, but you may also face a charge for possessing or being under the influence of a controlled dangerous substance without a prescription. The burden will be on you to produce evidence that you had a valid prescription as a defense to this charge. You can also successfully fight drug charges in New Jersey by calling into question the probable cause for the vehicle stop, the lab report, the search of your car, or another issue. You can take a look at many of the defense strategies that our lawyers use on our Criminal Defense Strategies page.

If you are facing charges for driving on prescriptions or driving with prescription drugs in your vehicle, an experienced NJ criminal defense attorney at our firm can explain potential defenses to your charges, along with the potential consequences of conviction and how we can help. Call us today at 201-556-1570 for a free consultation with a lawyer who can provide answers based on the particular facts of your case.