Criminal Allegations and Restraining Orders during Divorces and Breakups

Facing Criminal Charges while Splitting up with an Ex in New Jersey? You’re not Alone. 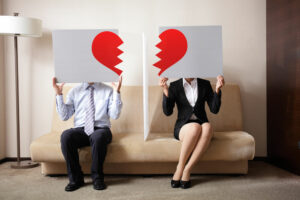 The end of a marriage is almost always tough on the spouses, and divorce is rarely easy for any of the parties involved. This is especially true when the divorce is contentious because emotions can run high both in and out of the courtroom. Many times, the process of going through a divorce can have an adverse effect on the emotional health and stress levels of both spouses. Moreover, when the divorcing spouses find themselves getting into heated and even violent altercations, that’s when physical health becomes an issue. If there are children involved, their safety might also become a concern. That’s why sometimes it can be necessary for one of the spouses to file for a restraining order or to bring criminal charges against the other spouse while the divorce is still being worked out in court. Sometimes, both things can happen in the same divorce or break-up situation. In fact, criminal allegations and restraining orders are a frequent occurrence in virtually all types of relationships when they come to an end.

How Do People end up Charged with Crimes During Divorce and Break-ups in New Jersey?

When it comes to domestic violence situations, New Jersey law enforcement tends to err on the side of caution. This means that if police are called to your residence on a domestic violence allegation, it is very likely that the person accused of committing an act of domestic violence will be placed under arrest. The most common criminal charges during a divorce involve accusations of violent and/or threatening behavior from one of the spouses. These charges often include the following:

While some acts of domestic violence involve physical aggression or actual violence, others involve verbal threats, intimidation, or emotional abuse. In some cases, you can be charged with a crime for damaging property that belongs to your spouse, such as a cell phone, car, or other personal item. Moreover, since many of these charges are classified as indictable offenses (felonies), you could be subject to significant prison time if you are eventually convicted or plead guilty.

My Ex Filed a Restraining Order Against Me, Now what?

It is important to understand that restraining orders are technically considered civil matters, not criminal matters. As a result, a restraining order is handled in the Superior Court Family Division, which is the same part of the judiciary that handles divorces. The initial restraining order that is typically issued in a domestic violence case is known as a temporary restraining order (or TRO). A TRO will limit your ability to contact the alleged victim, or even to be in the same household as any children you share with the alleged victim. Additionally, the standard of proof for a TRO is very low, since New Jersey authorities typically do not want to take any chances when there has been an accusation of domestic violence and there is the risk of further violence or harm to the victim. Basically, if the police are called to your residence on a domestic violence complaint, you may be arrested, and a TRO may be put in place against you.

There are certain predicate acts that provide grounds for a restraining order. These are criminal acts that can serve as the basis for a restraining order, as well as lead to criminal charges against the person accused. Some of the most common predicate acts of domestic violence in New Jersey are the same criminal charges that are often filed in divorce cases, such as: Assault,  Terroristic Threats, Kidnapping, Criminal Restraint, Sexual Assault, Criminal Mischief, Harassment, and Stalking.

If you have been accused of domestic violence by your spouse, ex-spouse, ex-girlfriend or boyfriend, and a TRO has been issued against you, an FRO hearing must be held within 10 days to determine whether a final restraining order should be issued. The judge will listen to arguments from both sides and evaluate the evidence to determine whether the defendant committed one of the predicate acts against the alleged victim, in addition to making a determination about whether the alleged victim has a legitimate fear for their safety. Any prior history of domestic violence by the accused will also be considered, since there must be a prior history of domestic violence between the spouses in order for an FRO to be granted. Ultimately, the judge may impose a final restraining order, and this order will be permanent unless removed.

Importantly, regardless of the outcome of the FRO hearing, you may still have to deal with any criminal charges stemming from the original complaint. That’s because the criminal matter will be handled in a separate court, and the two matters are legally two different things. This also means that you could be subject to a restraining order even if no criminal charges were filed against you.

What Is the Impact of Criminal Charges on a NJ Divorce Case?

The outcome of your divorce case may be significantly impacted by any criminal charges that have been filed by your spouse. Any settlement discussions could be made extremely difficult when there are pending criminal charges, since the spouse who filed the charges might be less open to resolving the divorce amicably. It should also be noted that family court judges are only human, and they are likely to have normal emotions and reactions to allegations of domestic violence. If you have been accused of domestic violence against your spouse, this could have a major impact on the judge’s decision in your divorce case, particularly if you and your partner have children together.

These are just some of the reasons that you absolutely need to speak with a lawyer if you have been accused of a crime by your spouse in the divorce process. An experienced attorney can help you fight the allegations and avoid the most serious consequences of a conviction, as well as take necessary steps to prevent the criminal charges from negatively affecting the outcome of your divorce proceeding, including any child custody issues.

There are serious implications to a restraining order that is issued during a divorce case. For starters, the spouses may not be allowed to communicate with each other outside the presence of legal counsel. It is also possible that a restraining order will bar one spouse from remaining in the family home or coming to the other spouse’s new residence, which could have an impact on child custody and visitation rights while the divorce is still being addressed in court. If the spouses are prohibited from meeting outside of court, it will be necessary for only the attorneys to discuss and negotiate things like spousal support and child custody. The end result could be that the divorce can only be resolved with a court ruling, and thereafter, a permanent restraining order could mean that an intermediary has to arrange and handle child care transfers from one parent to the other.

If a restraining order has been issued against you while breaking up with an ex or during your divorce, it is critically important that you abide by the terms imposed by the court. Not only could you be charged with contempt and placed under arrest for violating the restraining order, but the new criminal charges you face could be used against you during the divorce proceeding and have a deleterious effect on the outcome of the case.

Accused by an Ex in NJ? Contact our Defense Lawyers

The Tormey Law Firm is prepared to help you successfully navigate all of the challenges associated with charges for a criminal offense and a restraining order. With convenient offices located throughout New Jersey in Hackensack, Morristown, Newark, Middletown, and New Brunswick, we represent clients facing challenging criminal and domestic violence situations across the state. To discuss your current issue with an experienced attorney, contact us online or call (201)-556-1570 for a free consultation today.