Blood Alcohol Concentration Should be Lowered to 0.05 Percent for DWI, Study Says 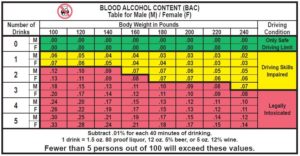 The National Transportation Safety Board released a recommendation that states should lower the per se limit for blood alcohol concentration (BAC) to 0.05 percent for driving while intoxicated (DWI) charges.

After a thorough review of research involving BAC limits throughout the world, investigators concluded that lowering the blood alcohol concentration limit from 0.08 percent to 0.05 percent has significant potential to reduce the number of drivers who operate motor vehicles under the influence of alcohol, as well as those who are involved in car accidents. So, what information did they find to support this contention and how does it contrast with current DWI law in New Jersey? Let’s find out.

When is person actually driving impaired?

Research has discovered that essentially all people are somewhat impaired when driving with a BAC at 0.05 percent. One study found that even heavy drinkers experienced some level of difficulty with one or more of the following when their blood alcohol concentration was 0.05:

How much alcohol does it take to reach a BAC of 0.05 percent?

Think of it this way: it takes a minimum of 4 alcoholic drinks for the average 170-pound man to reach a BAC above 0.05 in 2 hours. For a female weighing an average of 137 pounds, it takes only 3 drinks in 2 hours to have a blood alcohol concentration above 0.05 percent. Notably, these numbers reflect a person on an empty stomach. Many people go out for drinks and dinner, appetizers, or after eating some amount of food. The amount of food you have eaten before or while drinking can significantly influence your BAC. Other factors like your level of hydration, gender, age, metabolism, and body mass index (BMI) also have an effect.

The majority of Americans have reported in surveys that they would not drive after drinking 2 or 3 drinks in an hour. Of course, the size of a drink, the type of alcohol, and whether or not it is mixed with a non-alcoholic beverage vary on a case-by-case basis. In fact, it is really difficult to gauge your own blood alcohol concentration without the help of a breathalyzer device.

Does Lowering the BAC Limit Reduce Car Accidents and Fatalities?

Studies show a person is at least seven-times more likely to die in a single-vehicle crash with a BAC ranging from 0.05 to 0.079 percent when compared with drivers who have no alcohol in their system. Other countries like Australia and many in Europe have lowered their BAC limit from 0.08 to 0.05 and found a decrease in fatal and injury-related crashes. The percentage reduction ranges, and is evaluated in different ways in different countries, but the lowest decrease was between 5 and 8 percent and the highest was up to 18 percent.

Canada is slightly different, as they have what is known as a “warn range” between 0.05 and 0.08 BAC. If you are caught drinking and driving with a blood alcohol in that range, officers can suspend your driver’s license for up to a week. After British Columbia in Canada adopted this warn range policy, enacting a 3-day administrative license suspension for driving with a BAC from 0.05 to 0.07, research found alcohol-related fatal crashes decreased by 40 percent.

Under the current DWI statute in New Jersey, Section 39:4-50, a person is considered driving while intoxicated if they operate a motor vehicle with a blood alcohol concentration of 0.08 percent or more by weight of alcohol in their blood. In other words, New Jersey has a per se BAC limit of 0.08 percent. This comes into play in DWI cases for multiple reasons.

In New Jersey, the other BAC limit you should know is 0.15 percent. If it is your first DWI offense and your BAC is at or above 0.15, you may face an additional penalty with the mandatory installation of an ignition interlock device in your vehicle during the period of license suspension and for a minimum of 6 months after your license is restored.

Notably, if you are under the age of 21, it is illegal to drive with any amount of alcohol in your system in New Jersey. Thus, if your BAC is 0.02 percent and you are not yet of legal age to drink, you can be charged with underage DUI.

How Would Reducing the Legal Limit for Intoxication in NJ Change Things?

As it is, thousands of people are arrested and charged with DWI in New Jersey every year. At The Tormey Law Firm, our experienced New Jersey DWI defense attorneys help countless clients in courts across the state accused of drinking and driving. We can only imagine that many more DWI arrests will occur on a regular basis if the BAC limit for impairment is made even lower than the current 0.08 percent. If you have been charged with DWI in New Jersey, you should know there are many potential defense strategies that can be used to fight a DUI charge. One of the defenses we use to beat a DWI is to challenge the results of the breathalyzer test that police use to assess blood alcohol concentration in the majority of drunk driving cases.

« Hackensack Man Cited for Jaywalking After Being Struck by Truck
NYC Man Arrested for Distribution of Crystal Meth in Fort Lee, NJ »