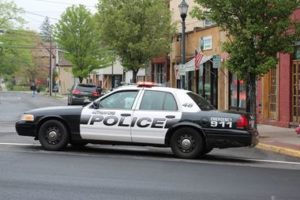 A man wearing high heels reportedly trespassed in a Rutherford, NJ residence and frightened two people inside the home. The strange incident unfolded just before 5:00 p.m. at a house located on Eastern Way in Rutherford, New Jersey. The suspect, 39-year-old Justin Paul Christodoro, allegedly gained entry through a backdoor, burst into the living room, and shouted, “I’m here!” The two residents, a husband and wife, were watching television at the time. They noticed that the suspect was wearing black high heels, a black t-shirt, and no other clothing.

According to Rutherford Police Captain Patrick A. Feliciano, Christodoro did not provide any explanation for his strange behavior. In fact, said Feliciano, Christodoro does not even know the two people who reside at the Rutherford home. After allegedly entering the house and yelling at the occupants, Christodoro quickly left the residence and then fled the area. Detectives with the Rutherford Police Department were called to the scene to investigate and subsequently notified neighboring police departments to be on the lookout for the suspect. A few hours later, Lyndhurst cops found Christodoro asleep in his car in a residential driveway on Lake Avenue in Lyndhurst, New Jersey. When police came across Christodoro, he was reportedly wearing the same outfit as earlier: high heels and a t-shirt, with no other clothes.

After being placed under arrest, Christodoro was transported by Lyndhurst police to the New Bridge Medical Center in Paramus so that he could receive treatment and be evaluated for possible drug use. Law enforcement believes that Christodoro may have been under the influence of a controlled dangerous substance (CDS). When Christodoro is released from the medical facility, he will likely be taken to the Bergen County Jail in Hackensack, NJ and held in advance of a bail hearing.

Christodoro has been charged with one crime in Rutherford and multiple crimes in Lyndhurst. According to authorities, the charge in Rutherford is for criminal trespassing, while the charges in Lyndhurst are for possession of a CDS and lewdness. Christodoro was also cited for a traffic violation for blocking a driveway in Lyndhurst, NJ. Depending on the findings of investigators, it’s possible that Bergen County prosecutors may decide to file additional criminal charges against Christodoro.

If the case ultimately reaches the trial stage in either Rutherford Municipal Court or Lyndhurst Municipal Court, Christodoro could be subject to significant penalties. That’s because many of the charges against Christodoro are considered disorderly persons offenses. A conviction for a disorderly persons offense would lead to a possible sentence of up to six (6) months in the Bergen County Jail.

The Tormey Law Firm defends clients against criminal charges and disorderly persons offense charges in Rutherford, Lyndhurst, Paramus, and everywhere else in Bergen County, New Jersey. Our experienced criminal lawyers understand the nuances of NJ law and know how the criminal justice system works. Contact us today to discuss your case over the phone or to schedule a free consultation at our Hackensack office.