The New Jersey Supreme Court recently decided that N.J.S.A. 39-3:33 should be interpreted narrowly, looking to the plain meaning and reasonable understanding of the term “obscure” or “concealed,” and must not be used as a pretext for police to violate any individual’s Constitutional rights. 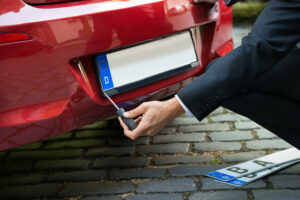 The ruling comes after two criminal cases were brought before the court, State vs. Darius J. Carter and State vs. Miguel A. Roman-Rosado. Both cases involved police stops based on section 33 that led to arrests on drug and gun possession charges. Both defendants filed motions to keep the evidence of drugs and the weapon from being submitted by the state, alleging the pretextual stop violated their constitutional rights and the statute the police relied on to stop the defendants was misinterpreted, overly broad, or unconstitutional.

The Cases that Set the Stage

What the Court Decided

The Supreme Court ruled that Carter’s license frame covered the entire phrase, “Garden State,” and therefore violated section 33, which requires all characters on a plate to be unobscured. They confirmed that all marks on a plate must be reasonably legible. However, since Ramon-Rosado’s plate frame only partially covered the words “Garden State” and that one could reasonably discern the phrase even with the partial covering, the section 33 stop was not warranted. The court further asserted that constitutional concerns prompted the court’s guidance on interpreting the law. Because the prosecution asserted that a license plate frame that obscures any license plate mark violates the law, the court applied a reasonableness standard to the statute’s meaning in order to avoid absurd results. Under the prosecution’s interpretation, if one-half of the “G” in Garden State is covered, the driver must pay a fine and be imprisoned if the fine is not paid. The court’s ruling avoided such illogical results by giving the statute a narrow reading.

The defendants’ direct challenge to the law is that section 33 is vague and broad, which invites unconstitutional governmental intrusion and a due process trap. A law must put those it applies to on notice of what could get them arrested. If the law is too vague or broad, an individual has no way of knowing how to comply with the law or avoid arbitrary and unpredictable police stops based on a violation of a law that is too vague or too broad to be understood. Rather than render the law unconstitutional, the court chose a narrow interpretation of the statute–a license plate must be legible–to save it from being thrown out as unconstitutional. To further their reasoning, they pointed out that the statute has not actually been enforced in years, just used as a reason to stop hundreds of thousands of people each year. That practice itself may be unconstitutional.

The Fourth Amendment provides protection against unlawful searches and seizures. That means that a law enforcement agent cannot stop you in a vehicle looking for evidence of a crime. An officer can only stop you if they have probable cause to believe that a crime has happened or is about to occur based on some form of evidence. They cannot simply look for evidence of crime where there is no suspicion that one has occurred or is about to occur. The state asked the New Jersey Supreme Court to consider the Heien case, which allowed a police officer’s mistaken understanding of the law to support the requisite suspicion for a traffic stop. But the New Jersey Supreme Court here called such a claim a diversion from the real issue: whether the police violated an individual’s rights by pulling them over for breaking the law when they, in fact, did not break the law.

What it Means for Criminal Defendants

While the import of the case seems to be restricted to license plate frames and a seemingly trivial section of the state’s traffic laws, it has greater implications for pretextual police stops and individual constitutional rights. The court sets a precedent implicitly condemning police stops that are essentially fishing expeditions for crimes. Looking at the age, race, gender, or other identifying factors of drivers and vehicles, police cannot use a mistaken interpretation of a law to justify an illegal detention. If you are stopped illegally, you have the right not to be detained. The courts protect that right. Furthermore, if you are stopped illegally and evidence from your vehicle or person is obtained from that stop, you have the right not to have that evidence used against you, to have it suppressed on a motion brought before the court in your criminal case.

Speak to a Criminal Defense Attorney about your Case

If you have been subject to an illegal stop, search, and seizure anywhere in New Jersey, contact the experienced criminal defense attorneys at The Tormey Law Firm to help you fight the charges. Depending on the evidence and what occurred, we may push for the prosecution to dismiss your case at the outset or battle the state along the legal process from arrest to trial. Our defense team can file a motion to suppress evidence illegally gathered, which the prosecution intends to use against you. The state is obligated to share with you what they intend to use to try and convict you. If a motion to suppress evidence against you is successful, the prosecution may not be able to prove you committed a crime or any of the offenses the state claims you committed in their criminal complaint.

At the end of the day, it is our commitment to protect your constitutional rights and thus, your freedom. Call (201)-556-1570 or contact us online if you would like a free criminal defense consultation.

« Can You Beat a Theft Charge in NJ?
Your Right to Privacy when Making Phone Calls from the Police Station »