How to Deal with Being Accused of a Crime in NJ

How do You Handle False Accusations? Start with Knowing the Right Actions to Take 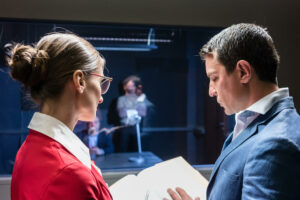 Lack of information should not prevent you from making the right moves when someone accuses you of a crime in New Jersey. With informative guidance on your side, you can confidently proceed through the legal process that follows knowing what you should and should not do along the way. Continue reading below as our criminal defense lawyers detail the important actions to take when dealing with being accused of a crime.

If someone wrongly accuses you of a crime you did not commit, the first thing to do is to assert your right to remain silent to law enforcement. You have the constitutional right to refuse to give your reasons, excuses, or defenses to the crime. Though the police may entice you to have a calm conversation about the accusation, you should not speak to the police, a detective, or anyone without counsel from an attorney. The police use what you say to justify the charges. Thus, you can politely answer with your name and identification if asked, but you can also politely refuse to answer questions until you have your attorney present.

#2 Get a Legal Professional’s Help – Hire an Attorney

Contacting a criminal attorney is critical for your defense. Though it is unfair that you must defend yourself against false charges, you must do all you can to beat the charges. An attorney is there to advise you on the best course to take, given the charges and evidence against you. If the evidence seems sketchy, your attorney may advise you to do nothing. They may advise you first to see what witnesses or evidence the police or a prosecutor produce. Since the prosecutor must have sufficient evidence to charge you with a crime to meet their burden of proof, you may wait and find they have little to nothing to support the charges.

An attorney may also contact a prosecutor or the police on your behalf to offer evidence proving you were not involved with the alleged criminal charges. The evidence may convince a prosecutor to drop the charges or dismiss the case. Besides helping you gather evidence to prove your innocence or defend you at trial, they can also advise you on how to file a counter-complaint depending on the type of situation that led to the allegations. For instance, this is common in cases of mutual fighting, where one person has been accused but may be able to file their own complaint for simple assault, among other crimes. You need to make the right move and hire an accomplished criminal defense lawyer, as opposed to trying to defend yourself in a court of law if it comes to that. The repercussions of having the case mishandled can be dire, including jail or prison time, suspension of your driver’s license, fines in the thousands of dollars, loss of income in potentially losing your job, child custody issues, a collateral restraining order being filed against you, and other costs arising from the false accusation.

#3 DO NOT Reach out to the Victim

While your instinct may be to contact the victim, that is not a good idea. Just like talking to the police is potentially dangerous to the success of your case, so is talking to the victim. The victim can twist what you say to justify their accusation. In other words, the victim could use what you say as ammunition for the prosecutor’s case, especially if you say things in anger. Your accuser may also report further crimes that you allegedly committed when contacting them. It is frustrating to face charges of crimes you know you didn’t commit, and you may say things in anger you regret. Plus, trying to convince them to drop the charges or stop the accusations and investigation from continuing can be mistakenly perceived as evidence of your wrong-doing. Even the best intentions for talking to the victim can go very wrong when your innocence is on the line.

#4 Start Assembling Evidence of Your Innocence

The more productive course of action is to gather evidence for your defense. In a domestic violence case, your ex may have accused you of child abuse, spousal abuse, or sexual abuse, among other crimes. Gathering receipts, emails, texts, phone records, and other evidence to show where you were at the time of the alleged offense may be crucial for your defense. Additionally, you want to keep notes and journal about essential details as you go through the legal process. You also want to jot down what you remember about encounters, witnesses, dialogues, or anything that may be relevant to the case. Otherwise, you may need help remembering essential details at a later trial.

You must also write down encounters with your accuser to remember what was said and done. You also want to carefully track what you said and did regarding interactions with your children and spouse in a contentious divorce and domestic violence action. Again, avoid being in the presence of your accuser without a neutral third party around.

Finally, you want to record anything you find on social media about the criminal accusation, taking screenshots when you see something relevant. You never know where you will find evidence that helps your case. Any text messages, emails, voicemails, social media posts, or other documented contact that supports your side of the story is also key. Find them, save them, and show them to your attorney.

#5 Make Sure You Have Information from Witnesses

Contacting potential witnesses helps build your defense. Anyone testifying to your location when the supposed crime occurred helps your case. A witness to conduct regarding your behavior and that of the victim is also valuable in your defense. Eyewitnesses that likely create doubt in a prosecutor’s or jury’s mind about your participation in the crimes charged are persuasive. Thus, if the victim accused you of sexual assault, a witness who can testify that you were with them at the time of the alleged assault certainly can help exonerate you. An alibi defense puts the prosecutor’s case in peril. Since the state must prove you committed the crimes charged beyond a reasonable doubt, an alibi certainly raises doubt that you committed the specific crime. Additionally, some stores run videos for security that can help you. A video recording of your location when the victim alleges you committed the crime damages the prosecutor’s case, as does a video that clearly captures what you were doing at the time if you did not, in fact, commit the crime in question.

#6 Undermine the Accuser’s Credibility (What Helps?)

Attacking the credibility of the victim and witnesses on their behalf is one of your attorney’s most important jobs at trial. Thus, witnesses who can testify to the dishonest or vengeful motives of the victim may be critical to your defense. In addition, evidence such as texts, emails, or social media posts that discredit the victim’s story and, thus, the victim, may be evidence of your innocence. Any mental health, substance abuse, or other issues indicating their lack of credibility may also be of great help to effectively defending against their accusations.

You and your attorney talk through all of your options, such as striking a plea deal, arguing a motion for evidence suppression or dismissal, enrolling in a diversionary program, or seeking to have the charges downgraded to a lesser offense to reduce your penalty exposure. This is based on an intensive review of your case and the evidence, which you should have done by the best criminal defense lawyer you can find.  Your attorney conducts their investigation of the facts and prepares any necessary motions for trial. For example, a criminal defense attorney often files a motion to exclude unlawfully obtained evidence with the court before or at trial. Sometimes the successful motion excludes evidence crucial to the state’s case, and the prosecutor or the judge may dismiss the case. The prosecutor may also reduce the charges. You may decide to try the case to verdict. If so, you want to begin strategizing your defense at trial. As mentioned, cross-examining critical state witnesses, meticulously gathering evidence and record keeping, and preparing your witnesses to prove your innocence and the victim’s malicious motives are all part of obtaining a not guilty verdict.

A talented criminal defense attorney may have several effective strategies to address your case. Therefore, you want to have an attorney handle your case, but not just any lawyer. The New Jersey criminal defense firm, The Tormey Law Firm, lets a track record with thousands of cases successfully handled speak for itself. If you have been accused of a crime by another person, a family member, someone at your workplace, an ex from your past, or anyone else who raises false accusations against you, contact an accomplished NJ defense lawyer at The Tormey Law Firm at (201)-556-1570 for a free consultation immediately.