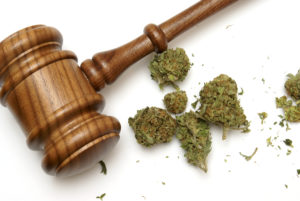 Do you need a lawyer for a drug charge in Woodbridge? Call us now for help.

The Middlesex County marijuana defense attorneys at the Tormey Law Firm recently achieved dismissal of marijuana charges in the Woodbridge Municipal Court. Our client was traveling through New Jersey to his home in Maryland and while he was sitting at a rest stop on the New Jersey Turnpike, police officers suspected he was acting in a strange manner. The officers approached our client’s car and then detected an odor of marijuana, which our client readily admitted to possessing. As a result, our client was issued a criminal complaint for the disorderly persons offense of possessing less than 50 grams of marijuana. With all criminal matters, the prosecution must prove the charges beyond a reasonable doubt and in marijuana possession cases a critical piece of evidence is a laboratory analysis report that confirms that the substance in questions was in fact marijuana. In our client’s case, the state did not provide a laboratory report and when the case became six months old, the judge agreed that the case should be dismissed for lack of prosecution. Accordingly, the case was dismissed and our client avoided a criminal record for allegedly possessing a small amount of marijuana for personal use.

New Jersey drug laws criminalize the possession of controlled dangerous substances, but the level of offense depends on the type and amount of drug. Generally, N.J.S.A. 2C:35-10 (a) states that it is unlawful for any person, knowingly or purposely, to obtain, or to possess, actually or constructively, a controlled dangerous substance or controlled substance analog, unless the substance was obtained directly, or pursuant to a valid prescription or order form from a practitioner, while acting in the course of his professional practice, or except as otherwise authorized by law. When it comes to marijuana, N.J.S.A. 2C:35-10(a)(4) states that the possession of 50 grams or less of marijuana, including any adulterants or dilutants, or five grams or less of hashish is a disorderly person.

Disorderly persons offenses in New Jersey are punishable by up to a $1,000 fine and six months in jail; however, for disorderly persons marijuana possession charges there is also a mandatory Drug Enforcement Demand Reduction (DEDR) penalty in the amount of $500 as well as the suspension of the defendant’s driver’s license for six to twenty-four months. Thus, the penalties for possessing even a very small amount of marijuana for personal use case result in steep penalties.

Need Lawyer for Drug Charge in Woodbridge? Contact us now

If you have been arrested and charged with the possession of a controlled dangerous substance such as marijuana, contact the criminal defense team at the Tormey Law Firm. We have handled countless drug cases in municipal and superior courts throughout New Jersey and we are ready to fight for you.