New Jersey May be Taking Steps to Legalize Mushrooms 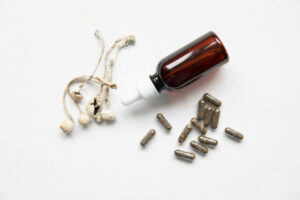 Psilocybin or magic mushrooms, their street name, is a component of certain mushrooms, typically toadstools. When ingested, human beings may experience various effects due to the serotonin-inhibiting characteristics. People on mushrooms may experience hallucinations, altered perceptions, mood changes, and time distortion. The federal government lists psilocybin as a Schedule I drug, meaning the Controlled Dangerous Substances Act qualifies the drug as having no safely usable medicinal purposes and a high likelihood of addiction and abuse. However, many states are embracing new laws to decriminalize or lower the penalties for small amounts of psilocybin for personal use. Last year, New Jersey entered the fold by reducing the penalties for possessing mushrooms. Now, a new bill has been introduced that would legalize psilocybin for personal use and even allow for cultivation in one’s home. If passed, the bill would go further than New Jersey’s changes to marijuana laws that decriminalized cannabis for one’s own use.

New Jersey initially passed Senate Bill S3256, which Governor Murphy signed into law in February of last year. The law reduced possession of psilocybin from a third degree crime to a disorderly persons offense for one ounce or less. Disorderly persons offenses carry a potential six-month prison sentence and a fine of up to $1,000.00. Before the new law, possessing any amount of psilocybin could potentially lead to three to five years in prison and a fine of up to $15,000.00. This year, New Jersey legislators are considering a new law, Bill S2934, which would legalize the use of psilocybin for medicinal purposes and decriminalize possession for personal use. Cultivation of mushrooms would also no longer be illegal at one’s own residence. The Psilocybin Behavioral Health Access and Services Act, the name of the new law, authorizes psilocybin’s use, manufacture, sales, and possession for health purposes.

The program allows those with specific conditions like clinical depression to use psilocybin as a treatment. Given the ongoing scientific literature proving the drug as a viable treatment for certain mental health disorders, anxiety, end-of-life palliative care, and substance addictions, the New Jersey Senate may acknowledge mushrooms as a medical drug to help residents with certain health conditions. Sponsored by Senator Nicholas Scutari, the bill aims to decriminalize the drug when used for medicinal purposes. The bill contains its purpose, regulatory structure, and implementation of the psilocybin services under the Department of Health’s (DOH) oversight.

Under the bill, anyone over 21 can use psilocybin for treatment and obtain it from licensed distributors. However, the bill avoids specific details of how the consumer receives the product. Instead, it includes a lengthy protocol of how the program gets set up, including a Psilocybin Behavioral Health Access and Services Advisory Board to advise the DOH. The board is a committee of experts in various fields relating to the project, such as mental health experts, drug experts, and the like.

The setup resembles the marijuana rollout for New Jersey, with an oversight board, and regulations on licensing, cultivation, distribution, retail, and consumption. Another notable element of the bill is the exclusion of those with criminal histories from obtaining a license for a psilocybin services center without proof of rehabilitation. Also noteworthy is the psilocybin worker permit required of all who participate in the production, delivery, testing, sale, or administration of psilocybin products and services, issued only to those 21 or over with psilocybin training. It also includes establishing local or microbusinesses with fewer than ten employees, product manufacturer advertising restrictions, delivery restrictions, service center screening requirements, and product testing. In addition, the legislation casts the DOH as the informational center on psilocybin development studies. Finally, the bill has various protections and immunities against criminal prosecution for participants, users, and manufacturers.

If passed, the new law would also decriminalize possession of mushrooms to eliminate long prison sentences and other penalties for personal use, among other problems associated with drug policing. It also contains a provision that allows for expungements of past crimes for using, producing, and distributing psilocybin. Unlike the marijuana laws in New Jersey, the new bill seeks to allow psilocybin cultivation at home for personal use. This would mean it would no longer be a crime to grow magic mushrooms on your property at your home. Marijuana cultivation, on the other hand, is entirely illegal for individuals at their own residences. In fact, New Jersey outlaws cultivation of marijuana at home under any and all circumstances. This often leads to charges against people for maintaining or operating a CDS production facility and marijuana manufacturing, charged under the marijuana distribution law.

Arguments for and Against Legalizing Magic Mushrooms in NJ

Critics of the bill worry that nothing in the bill offers solutions to address driving under the influence of the drug or keeping it away from children. Although the bill restricts service centers from operating close to schools, those against its implementation argue that home cultivation does not protect children from accidental exposure, although it does specifically include a provision that the mushrooms must be safely kept away from children under 21 years old to prevent such access. Prosecutors have also voiced concerns about mushrooms as gateway drugs. On the other hand, supporters of the bill argue that there is a big difference between users of marijuana and mushrooms. Marijuana is a far more popular recreational drug than mushrooms, which cause a far more intense experience. Some say that the state does not want to ruin lives over a small amount of marijuana or mushrooms for personal use. Still, neither does it like the illegal distribution of dangerous drugs that can harm those who ingest unregulated drug doses and quality, or expose children to drugs.

Although the bill would effectively decriminalize psilocybin use and possession of four grams or less and home cultivation, it would still be a Schedule I drug for federal prosecution purposes and would continue to be illegal in New Jersey in greater quantities than the new bill prescribes. Even if it is passed and you had more than four grams on you, the police could arrest you and charge you with possession of a controlled dangerous substance, just like they can now for any amount of psilocybin. Additionally, you could face other charges for violating licensing and manufacturing regulations under the new regulatory scheme for this possible second rollout of decriminalized drugs. If your arrest was for violating the recent bill’s provisions by exceeding the permissible weight of mushrooms, you could still face harsh consequences.

On the lighter side, in addition to having the ability to possess mushrooms in small quantities, the bill’s passage would also mean expungement of criminal records related to past drug offenses involving psilocybin. In other words, like some past convictions with marijuana since the New law took effect in New Jersey, the legal mushroom proposal may mean clearing records of those convicted of psilocybin offenses before the new law, if it ultimately passes and is enacted.

Since the recent psilocybin bill is a work unfolding, you will need experienced advice and criminal defense representation if you are facing charges for possession or distribution of mushrooms in New Jersey. Remember, this proposed bill has yet to be passed or signed into law, so today’s standards say psilocybin remains illegal in New Jersey.

Charged with Mushrooms in NJ? Contact a Drug Defense Lawyer for a Free Consultation

If the police arrested you for small amounts of psilocybin for personal use, larger amounts for alleged intent to distribute, cultivating mushrooms unlawfully, or another drug crime involving psilocybin, you should contact The Tormey Law Firm right away to talk to a criminal defense lawyer who can help. New Jersey is still tough on drug crimes, despite some efforts toward expanding decriminalization. You deserve to have a dedicated attorney who can protect your rights, investigate the evidence to confirm if the police did their job right, and ensure that the court is not throwing the book at you when you have extenuating or mitigating circumstances.

No matter what the circumstances may be, it is critical to get advice of counsel from an experienced New Jersey criminal lawyer who can review your case and develop the best strategy to defend you against the state. Our team knows and has proven successes beating drug charges in courts in counties throughout New Jersey, including in Bergen County, Middlesex County, Essex County, Hudson County, Union County, and Somerset County. Contact an experienced drug defense attorney if your charges include disorderly persons offenses or indictable crimes related to psilocybin possession, sale, manufacture, or distribution.