What You Need to Know about Harassment Accusations in NJ

Elements of Harassment in Criminal & Restraining Order Matters in NJ 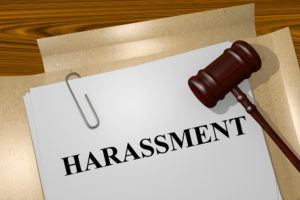 You can’t imagine how many people get charged with harassment in New Jersey because of an irritated neighbor, police officer, ex-spouse, or another person who is simply irritated with their behavior. But irritation is not cause for a criminal conviction or the serious repercussions associated with harassment under New Jersey law. If you are someone you love is facing harassment charges, you should seek legal guidance from an experienced criminal defense lawyer as soon as you can. Harassment offenses are punishable by jail time and may also be used as grounds for a restraining order in New Jersey.

A knowledgeable attorney can often undercut the state’s case, demonstrating that the alleged conduct does not rise to the legal definition of harassment. At The Tormey Law Firm, our New Jersey criminal defense attorneys have helped thousands of clients get harassment charges downgraded or dismissed. We also successfully combat restraining orders where harassment is cited as justification in courts across the state on a regular basis. Learn more about New Jersey harassment laws below and contact us directly at (201)-556-1570 to discuss your situation. A lawyer is available immediately to provide you with a free consultation.

What is Considered Criminal Harassment in New Jersey?

Harassment is a criminal offense codified in section 2c:33-4 of the New Jersey Code of Justice. In order to be found guilty of harassment, a person must act with the intent to harass another, and communicate anonymously or at extremely inconvenient hours, or with offensive language, or in any other alarming or annoying manner. Harassment can also occur when a person strikes, shoves, kicks, or otherwise touches another person offensively, or threatens to do so. A charge for harassment may also arise if a person engages in any other type of alarming behavior or repeatedly behaves in a way to seriously annoy another person.

You can see from the language in the statute that harassment is an extremely broad offense in New Jersey, making it all the more likely for a person to be charged with harassment. Considering the subjective nature of the terms “annoying” and “alarming,” it is common for someone to face harassment charges simply because no other offense applies to their conduct in a given situation. Although the definition of harassment gives an impression that this offense is somewhat trivial, it belies the fact that harassment charges can result in serious penalties for those convicted.

Sentencing for Harassment in NJ

Typically, harassment is considered a petty disorderly persons offense. This is basically the lowest-level criminal offense under New Jersey law, similar to a misdemeanor in other states. With that said, a harassment charge can be enhanced to a fourth degree crime if the defendant is on parole or probation for another offense. If you have been charged with a petty disorderly persons offense for harassment, you’re facing up to thirty days in jail and a maximum fine of $500. On the other hand, fourth degree crimes for harassment are punishable by up to 18 months in New Jersey State Prison.

It is important to note that a petty disorderly persons offense charge for harassment is handled in the local municipal court where the charges were filed. These cases are decided by a municipal court judge and not a jury. As for fourth degree harassment, this is an indictable offense, which is handled at the county superior court and subject to indictment. This means the prosecutor will have to present the case to a grand jury, who have to decide if there is sufficient evidence to indict you, before your case can move forward to trial. It is imperative to have an experienced criminal defense lawyer representing you on harassment charges because they can often negotiate with the prosecutor to have the charges downgraded and remanded to the municipal court. Essentially, this means the charges will be reduced to a lesser offense and you will be subject to less severe consequences if ultimately found guilty.

Regardless of the degree of your harassment charges, a conviction will result in a criminal record. Our criminal defense attorneys frequently negotiate to have harassment charges downgraded to municipal ordinances to help our clients avoid this fate. We always pursue an outright dismissal first, calling into question the weaknesses of the case against you.

Is Harassment Grounds for a Restraining Order?

Yes. Harassment is not only a criminal offense in New Jersey, but it is also considered a predicate act of domestic violence and thus, grounds for a restraining order. There are numerous offenses classified as act of domestic violence under the NJ Prevention of Domestic Violence Act, and harassment is arguably the most common one included in Temporary Restraining Order applications. The problem is, you can be charged with harassment and face a permanent restraining order based simply on the word of another individual. Even if you are not charged with harassment in violation of NJSA 2c:33-4, a restraining order can still be issued against you based on harassment allegations.

Facing Charges for Harassment in New Jersey? Call us Today.

If you have been charged with harassment, have been notified of a temporary restraining order, or both, you need an aggressive criminal defense attorney who knows the law and will fight for your innocence. It may seem absurd, but countless harassment cases hinge on a he-said, she-said. Fortunately, the law requires evidence and with a skilled lawyer on your side, you can win your case. For more information and a free consultation, contact the attorneys at The Tormey Law Firm at (201)-556-1570.