Repercussions of a Restraining Order in New Jersey

A Restraining Order can impact many areas of your life, from the immediate consequence of ending contact with the other party, to unintended repercussions that can affect your job, living situation, child custody, gun rights, finances, reputation, and potential criminal record. 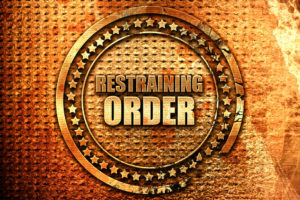 Repercussions of a Restraining Order in NJ

Domestic violence protective orders, also known as restraining orders, prohibit the person named in the order from contacting or coming near the protected person at their home, school, employment, or other specific locations. They are initially filed as Temporary Restraining Orders (TRO) until a hearing, and ultimately a trial, where the parties present their cases to the judge who then determines if the TRO becomes a final order. New Jersey final restraining orders (FRO) last until someone petitions the court to dismiss it (if the judge consents to dismissal) and are otherwise permanent. Only a judge can dissolve the order. Anyone over 18 or an emancipated minor can file for one in the family law court against a spouse, former spouse, dating partner, or parent to the victim’s child if the person committed domestic violence in the form of 14 specified crimes, including harassment, stalking, assault, and unlawful restraint or confinement.

Impact of a Restraining Order in NJ

An FRO bars the named person, the defendant, from doing any of the named activities in the order, such as contacting or coming near the protected person, their family, friends, or their household members. That means they cannot come near the household they shared with their spouse or significant other and possibly their children. No contact includes texting, telephoning, or emailing the protected parties. It also means the defendant is prevented from owning or possessing a firearm. And it could mean monitored or otherwise restricted visitation with children, lost child custody, and payment to the protected party for support, lost earnings, attorneys fees, and reimbursement for bills, including household bills, medical bills for injuries the defendant caused. An FRO may order the defendant to pay for and attend counseling, substance abuse programs, or other services. Violating the order may lead to contempt charges, which is usually a fourth degree crime, possibly leading to fines and 18 months in jail.

Since FRO’s are copied to the local law enforcement agencies, the police respond to calls for FRO violations, and depending on the type of violation, can arrest and charge the violator with contempt and other crimes in a criminal complaint. The plaintiff can also file criminal charges for a violation. But even if the order is never violated, the consequences of an FRO are severe. A person named in an FRO is fingerprinted, photographed, and registered with the New Jersey Domestic Violence Registry, which could jeopardize current and future employment and employment opportunities in certain fields. Since the protected parent often has primary custody after an FRO, future attempts to regain child custody can be an uphill battle. In fact, co-parenting, which requires communication about the children, is often nearly impossible.

And while domestic violence alone may not lead to children being removed from their parents, the Department of Child Protection and Permanency (DCPP) may become involved to investigate and seek court protection for the children against an abuser. Domestic violence is known to negatively affect children psychologically, emotionally, and socially, even if not physically abused. And if children are physically injured intentionally or accidentally during an incident of domestic violence, DCPP may well consider recommending the abusing parent not have visitation, have only monitored visitation, or even lose parental rights altogether, terminating both physical and legal custody. DCPP’s investigation and recommendations can also be used in a separate divorce or custody action.

What can you do about a restraining against you?

You can appeal the order, but this process is complex, requiring the skilled assistance of a restraining order appeals attorney. Similarly, you can file a Motion to Vacate, but you are unlikely to be successful on your own, as the legal and procedural requirements can be too complicated for the average person. Getting help with a motion to remove a restraining order is highly advisable when you want to position yourself for success.

Likewise, your best defense against the consequences of a permanent protective order is at the FRO hearing, where the parties get the chance to state their side of the story, present evidence, like police reports and medical records, and bring witnesses to testify to the judge and help defend against the FRO. While most defendants want to save the expense of an attorney at the FRO trial, the repercussions of a permanent restraining order can be far more costly. As such, you should consider hiring an attorney experienced in handling all aspects of restraining orders in New Jersey. Our lawyers can help you fight for your freedom at a final restraining order hearing, and assist with appealing or vacating an existing FRO issued against you. Simply call (201)-556-1570 or contact us online to discuss your case today. Consultations are always provided free of charge.