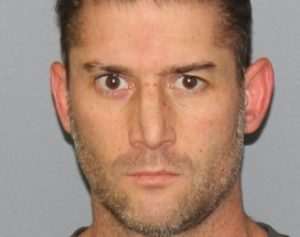 Authorities recently arrested a Palisades Park police officer accused of possessing illegal drugs at his residence in Fort Lee, New Jersey. The suspect is Richard J. Giacobone, a 39-year-old man who lives at 496 Summit Avenue in Fort Lee, NJ and who works for the Palisades Park Police Department. He was placed under arrest after law enforcement searched his home and allegedly discovered narcotics and illegal weapons. The Palisades Park Police Department notified the Fort Lee Police Department after learning that Giacobone may have been “under the influence of illegal narcotics.” Fort Lee law enforcement worked with the Bergen County Prosecutor’s Office Narcotics Task Force and the Bergen County Prosecutor’s Office Confidential Investigations Unit to investigate and obtain a search warrant for Giacobone’s home, culminating in detectives searching the premises. That search allegedly turned up numerous drugs, including cocaine, marijuana, and anabolic steroids. Additionally, police officers reportedly found large capacity ammunition magazines that are banned under NJ law.

After allegedly finding the narcotics and weapons at Giacobone’s residence in Fort Lee, police officers placed him under arrest. He was subsequently taken to Fort Lee police headquarters for processing and then transferred to the Bergen County Jail in Hackensack, NJ. He is set to make an appearance in Bergen County Central Judicial Processing Court on December 1. Depending on how the case develops, Giacobone may eventually have to answer the criminal charges in Bergen County Superior Court.

Illegal drug possession is a very serious criminal offense in New Jersey and carries significant penalties that include a lengthy term of incarceration in NJ State Prison. In recent years, law enforcement in Fort Lee, Palisades Park, and elsewhere in Bergen County has been cracking down on drug crimes due to a surge in drug overdose deaths. In this case, Giacobone has been charged with numerous drug crimes, including possession of cocaine, possession of marijuana, and possession of anabolic steroids. As set forth by N.J.S.A. 2C:35-10(a)(1), the cocaine possession charges are classified as a third degree felony and could result in a sentence of 3-5 years in state prison.

In addition to facing drug crime charges, Giacobone has also been charged with weapons offenses because police allegedly found him with illegal ammunition devices. Although Giacobone is a police officer, he was not legally allowed to have large capacity ammunition magazines because they are prohibited by NJ law. The New Jersey Criminal Code imposes severe penalties for criminal weapons offenses, which means that Giacobone will likely have to answer both the drug offense charges and the criminal weapons charges.

Since Giacobone is a police officer in Palisades park, his job could be in jeopardy if he is ultimately convicted of the criminal offenses. According to media reports, Giacobone previously worked for the New Milford Police Department. He reportedly resigned from his New Milford law enforcement job in 2015 and started working as a police officer with the Palisades Park Police Department.

The smartest move you can make if you have been charged with cocaine possession or any other drug crime in Fort Lee, NJ is to secure the services of an aggressive criminal defense attorney. The Tormey Law Firm has a team of skilled attorneys with experience defending people against cocaine possession charges and cocaine distribution charges in Fort Lee, Paramus, Hackensack, and everywhere else in Bergen County, New Jersey. Contact us today to discuss your options.