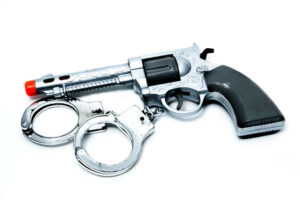 It was not the first accidental death by prop gun on a movie set, but hopefully, it will be the last. The attention Alec Baldwin’s unintentional shooting on the location of the movie Rust brought to this danger may make a difference in what kind of prop guns are used and handled on movie sets. Movie productions use prop guns to simulate real firearms. However, there have been accidental injuries and deaths using prop guns in the past. For instance, Jon Erik Hexum, on the set for the television series Cover Up, accidentally killed himself with a prop gun. The firearm had blanks, but the blank’s force in contact with the actor’s head led to his death. In the ’80s, Bruce Lee’s son died of a prop gun wound, and other explosive props injured other actors previously, prompting stricter guidelines on set weapons props. The various instances of tragic events involving fake or toy guns has ignited a public debate on when, how, and why these weapons can and should be possessed and used. Let’s take a look at what a prop gun means, why it is still risky, and how this case can be understood in the realm of weapons laws in New Jersey and across the nation.

What is considered a prop gun?

There are two categories of prop guns: fake and real. A prop gun can be a toy gun with no firepower or a real firearm with blanks. The cinematic effect creates the look and the noise of a real weapon, complete with smoke and real fire. Nevertheless, even with blanks, the firearm prop can be deadly.

Why is a prop firearm still a risk?

The prop gun can be deadly because it still holds ammunition. All ammunition, whether a weapon has blanks or live rounds, consists of casings, the metal that contains the gun powder and bullet. The bullet is what gets discharged at high speed to enter its target. A blank does not have a bullet, only powder unless stuffed with paper or plastic wads that project at explosive rates. The movie production sometimes uses wadded-up paper to fire when the gun holder shoots, thus simulating a real gun with fire and smoke. Given the inherent dangers of handling even bullet-less guns, careful supervision and instruction for actors using the prop is the usual protocol.

Those responsible for making sure the guns used on set are loaded or unloaded and handled correctly are the property masters or armorers. In addition, a weapons master oversees the use of the firearm on the scene. They ensure that the gun is loaded correctly, tested, and checked. They also instruct actors how to use the weapon. Together, the two in charge of prop guns cover all possible contingencies with the weapon. The property master shoots the firearm before it is used and ensures no obstructions or misfires occur. Then, either of the two can load the gun, or someone they verify has the experience to do it.

What does New Jersey law dictate about toy guns?

The incident with Alec Baldwin occurred on-site in New Mexico, which has its laws regarding firearms. In New Jersey, strict gun laws dictate permissible weapons and who can possess, purchase, and distribute them. New Jersey and federal law prohibit the purchase and possession of toy guns unless they have distinct markers indicating a toy, like a bright orange strip on the barrel or other conspicuous place, as well as other specifications.

New Jersey’s 2018 law prescribes the sale of fake guns. It is against the law to sell or otherwise give a toy gun to anyone unless it is a color that distinguishes it from a real gun, so no black, silver, blue, or aluminum. In addition, the imitation firearm must have a permanent one-inch-wide orange stripe along both sides of the barrel, which must have a one-inch minimum barrel. Finally, the gun must be closed off at least a half-inch from the front of the barrel and be uniform with the gun’s material. These signature characteristics identify guns as fake, so no one mistakes them for real guns, and so no one can turn them into something other than a toy marketed to children.

If an individual violates the law by selling a toy gun that appears to be a genuine firearm, they must pay up to $500.00, unless it is a second offense or for all subsequent violations, which goes up to $1,000.00. The penalty is a civil fine. The law in New Jersey outright prohibits the sale of firearms that look real. And if the fake guns do not meet the specifications of state law, they must meet the specification of the federal law. Under federal law, the toy or imitation gun must have several distinct designs to distinguish it as fake. For example, it should have bright orange strips along the barrel sides or be all white or transparent or other non-typical bright colors of a gun.

In addition, the use of an imitation firearm in the course of committing an offense can lead to multiple criminal and weapons charges against someone. For example, you may be charged with the underlying offense itself, along with possession of a weapon for an unlawful purpose, even if the gun was technically fake.

Many questions come to mind with the recent incident, including whether criminal charges will be filed in the case. While New Jersey law strictly limits the manufacture, sale, and distribution of fake firearms for obvious reasons—to prevent their use as real guns or to prevent accidents—the danger to set crew members with prop guns still exists. The Baldwin case demonstrates the potential need for reviewing theater exemptions and fake firearms. Perhaps this is a single incident with no global ramifications or, given the past injuries and deaths with props, the movie industry is required to make changes to prevent future deaths. The ultimate impact of the latest death remains to be seen.