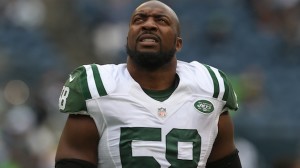 Defendant applies for the PTI program to avoid felony record

A New York Jets linebacker and Randolph resident was charged with the aggravated assault of his wife and possession of hydrocodone and marijuana after an incident at his home on October 31. The Defendant has applied for admission into the Pre-Trial Intervention (PTI) program. If he is admitted into the program and successfully completes the probationary period, the charges will be dismissed at the end of his probation.

According to the Daily Record article, “Thomas, 33, was charged Oct. 31 in Randolph with aggravated assault upon his wife at their home. The linebacker — described as 6 feet, 4 inches and 265 pounds on the NFL roster — allegedly pushed his wife with a kitchen chair, punched her in the stomach, and grabbed her by the neck, causing pain and marks on her body, according to criminal complaints. Thomas, who posted $2,500 bail after his arrest, also was charged with unlawful possession of a weapon (the kitchen chair), possession of drug paraphernalia, possession of less than 50 grams of marijuana, and possession of 20 tablets of suspected hydrocodone.”

Aggravated assault is a felony charge in New Jersey which can be graded as a second degree, third degree, or fourth degree charge depending on the nature and circumstances of the alleged offense, the extent of the injuries to the alleged victim, and whether or not a weapon was involved.

In addition, it is sometimes difficult to get into PTI, a first time offender program for certain crimes, when the alleged offense is violent in nature. That would be up to the Morris County Prosecutor’s office, the probation department, and, ultimately, the Judge who would sign an order suspending his criminal charges during the period of his probation. You can only use this program once in your life. For additional information, please see my PTI informational video.

If you or a loved one needs assistance with an aggravated assault charge in Morris County, we can help. Contact us now for immediate assistance at 201-556-1570. We have an office in Morristown and provide free initial consultations.