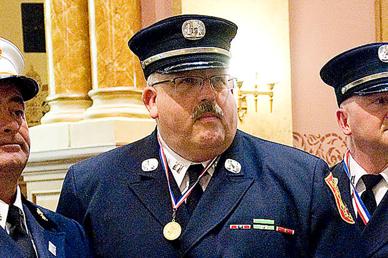 A battalion chief with the Jersey City Fire Department was recently arrested for allegedly driving drunk in Leonia, NJ.

The suspect is a 57-year-old man who lives in Dumont, New Jersey. He has worked for the Jersey City Fire Department for 34 years and has served as the battalion chief for the past six years.

The DWI arrest was made a short time after 4:00 p.m. According to law enforcement, the suspect was operating a private vehicle on a road outside of Overpeck County Park in Leonia NJ and driving recklessly. This prompted another motorist to dial 911 and alert the Leonia Police Department to a possible drunk driver on the roadway.

A Leonia NJ patrol officer was dispatched to the area, where he allegedly spotted the suspect’s car swerving across lanes. The Leonia cop pulled over the suspect’s motor vehicle and investigated further.

It is unclear whether the police officer administered a breath test or field sobriety tests. What is known at this time is that suspect was placed under arrest and charged with Driving While Intoxicated (DWI).

If the suspect is convicted on the DWI charges, he would be subject to severe penalties that could include suspension of his driver’s license, heavy fines, and even jail time. The scope and degree of the penalties would depend in large part on whether the suspect has any prior DWI convictions on his driving record.

Additionally, it is possible that the suspect could face discipline from the Jersey City Fire Department.

To learn more about this case, check out the NJ.com article, “Jersey City Fire Battalion Chief Charged with DWI in Leonia.”