Charged with Drugs in E-Cigarette in New Jersey 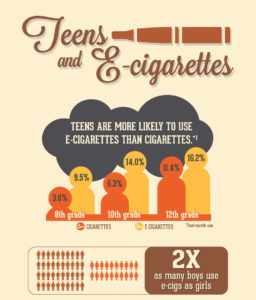 More and more people today are using electronic cigarettes, also known as vaping, e-cigarettes, e-vaporizers, or vape pens. There are currently over 460 different brands of e-cigarette available and these items are not technically illegal in and of themselves. While smoking an E-cigarette containing nicotine is legal in New Jersey, using a vaporizer to smoke a controlled dangerous substance (CDS) is not. Under New Jersey law, possessing even a trace amount of an illegal substance, including marijuana, is a criminal offense. As such, vaping marijuana or another drug in an E-cigarette can lead to serious drug charges, even if you didn’t think there was any left in the reservoir.

If you or a loved one has been charged with marijuana or another drug in a vape cigarette in New Jersey, you should consult a criminal defense attorney right away. The penalties you’re facing are more severe than you think and you need to confront your charges with an aggressive defense to avoid them. Our experienced New Jersey criminal defense lawyers at The Tormey Law Firm are here to help you anytime, so call us at (201)-556-1570 for a free consultation.

Arrested for Marijuana in a Vape Pen in Hackensack

Even though use of marijuana is becoming more mainstream and many believe its legalization in New Jersey is forthcoming, its possession is still currently illegal and may even be punished with jail time. If the police find marijuana in your electronic cigarette and it is immediately apparent that there is weed in the reservoir or any other part of the e-cigarette, they may charge you with possession of less than 50 grams of marijuana. Even if it is not visibly obvious whether the substance is marijuana, they can test the residue in the vape to check if it is pot. If there is even a small amount of drug residue, no matter how small, the police can charge you with a drug crime.

Cases involving possession of 50 grams or less of marijuana are heard in the municipal court in the town or city where you were arrested. A judge, rather than a jury, will hear your case and decide whether you are guilty or innocent. If convicted, a disorderly persons weed offense can carry up to 6 months in prison and fines of up to $1,000.

How do I Avoid a Conviction for Drugs in an E-Cigarette in Paramus?

The are several ways to avoid being convicted of a drug charge in New Jersey. If you are a first time offender and are charged with possession of marijuana for residue found in your e-cigarette, you are likely to be eligible for a diversionary program called Conditional Discharge. If you are admitted into Conditional Discharge, you will be subject to a period probation with a set of conditions that you must follow. These conditions often include not using any drugs, not getting arrested, attending work or school, reporting at regular times to your probation officer, participating in a drug education program, and possibly community service. If you successfully complete the program, the charges against you will be dismissed. If you violate a condition of your conditional discharge, your case may be reopened and you may be sentenced based on the original charges.

You can also get drug charges dismissed by mounting a strategic defense to undermine the prosecution’s case against you. Defense arguments in criminal cases can be very complex and require a deep understanding of evidentiary rules and constitutional rights. Particularly in drug cases, if you are able to challenge the admissibility of evidence either because it was obtained in violation of your constitutional rights, mishandled, or test results are unreliable for some reason, it can be very difficult for the prosecution to prove its case against you. Our attorneys have gotten thousands of criminal charges dismissed using some of our highly effective defense strategies in courts throughout New Jersey.

Facing Drug Charges for an E-Cigarette in New Jersey

If you have been charged with drug possession after police found marijuana or another form of CDS in your electronic cigarette, it is important that you begin strategizing your best defense as soon as possible. Call our New Jersey criminal defense lawyers today at (201)-556-1570 for a free consultation. We are here to answer all of your questions and if you so choose, will fight for the best possible outcome in court.

For more information about E-Cigarettes, access the following resources: