Charged with a Crime on Thanksgiving in NJ

Arrested on Thanksgiving in New Jersey 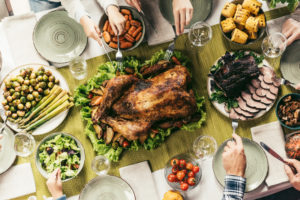 Being charged with a crime at any time is an extremely stressful experience, much less on a day like Thanksgiving. What began as a happy holiday celebration can quickly spiral into a nightmare. When you are facing charges from the day of or before Thanksgiving, the potential consequences of a conviction can hit you like a slap in the face. At The Tormey Law Firm, our experienced New Jersey criminal defense lawyers are prepared to defend you against all manner of criminal and DWI charges issued on Thanksgiving Eve and Thanksgiving in Morristown, Hoboken, Hackensack, Parsippany, Bloomfield, Paramus, Fort Lee and throughout NJ. As a law firm dedicated to criminal defense in New Jersey, we handle these cases in local courts on a daily basis with a firm committment to delivering the best possible results. Learn more about common charges below and take the opportunity to have your specific questions answered in a free consultation. Call us today at (201)-556-1570 to speak with an attorney or send us a message. A member of our team is available immediately to assist you.

Police officers in New Jersey know that holidays like Thanksgiving are filled with parties and events where many people drink alcohol. Accordingly, law enforcement counts on the fact that you and your friends and family will be having a great time and perhaps not paying attention to how many drinks, glasses of wine, or beers you consume in the course of a day or night. Unfortunately, this can go wrong and result in criminal charges or an arrest for driving under the influence (DUI). Some of the most common charges you may face from an incident on Thanksgiving or Thanksgiving Eve are outlined in greater detail below.

Criminal charges for disorderly conduct are among the most prevalent in New Jersey at any time of year. This offense is often used by police officers to justify charging someone who is being “disruptive.” Disorderly conduct encompasses a vast array of behavior that may be considered improper or annoying. You can imagine has easily a person can find themselves facing charges for a violation of the disorderly conduct statute, NJSA 2C:33-2, since it includes offensive language, getting into a verbal or physical fight, being drunk in public, or creating some type of nuisance or hazard that affects the people around you. If convicted of disorderly conduct from an incident during Thanksgiving festivities, you could be punished by up to 30 days in jail and a fine of up to $500. You will also be left with a criminal record, as disorderly conduct is technically a petty disorderly persons offense in New Jersey.

Arrested for DWI over Thanksgiving

The days surrounding and Thanksgiving itself are some of the busiest travel days of the year in the U.S. Thousands of people take to the roadways to attend holiday parties and visit with their loved ones. With this in mind, police literally station themselves on highways and other major roadways in the hopes of identifying drivers who are under the influence of drugs or alcohol. It often comes as a rude awakening when you’re driving home and pulled over for suspected driving while intoxicated or high. Having to deal with the consequences of a conviction for DWI in New Jersey is even more devastating, as any DUI charge carries mandatory driver’s license suspension under NJ Law. What’s worse is that if you’re arrested for drunk driving with a minor in the car, even if it is your own son or daughter, you may face companion criminal charges for endangering the welfare of a child.

Charges for simple assault and aggravated assault occur very frequently around Thanksgiving, both in public places and private residences. Being charged with simple assault for engaging in a fight or getting into a scuffle at a bar, restaurant, sporting event, or other gathering often happens when you or another person has been drinking. The other primary reason why assault charges arise around the holidays is the close proximity of families and the tensions that often come with family get-togethers.

When you are accused of assault of a family member, someone you live with, your spouse, boyfriend or girlfriend, or your child’s other parent, the negative results can be two-fold. Domestic violence assault can not only result in criminal charges, but also a restraining order. Both of these matters can spell long-term problems for your life. You’ll need to appear for two separate legal proceedings and defend against potential jail time, as well as a permanent restraining order. Being found guilty of committing an act of domestic violence in New Jersey can also negatively affect your job, your child custody situation, your immigration status, and your ability to own a weapon.

Need a Lawyer for a Criminal Charge at Thanksgiving in NJ

If you have been arrested on criminal or DUI charges around Thanksgiving, a New Jersey criminal attorney at The Tormey Law Firm is here to help you. We often assist clients who run into issues during the holiday season in Mahwah, Palisades Interstate Park, Paterson, Woodbridge, East Rutherford, Montclair, and statewide. We know you have enough on your plate as it is and we can handle this fight for you. Call (201)-556-1570 now to discuss your charges during Thanksgiving and get started on building the most effective defense. Consultations are provided free of charge. You can also make an appointment to meet with us in person at one of our five convenient office locations.