“We represented a client recently in a Bergen County restraining order hearing at the superior court in Hackensack. The judge found an act of domestic violence but dismissed the restraining order because there was no need to protect the alleged victim moving forward.” 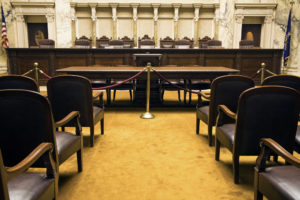 Attorney needed for a restraining order hearing in the Bergen County court in Hackensack? We can help.

Christopher Perry of the Tormey Law Firm LLC represented a client yesterday who was facing a permanent restraining order in the Bergen County Superior Court located in Hackensack, New Jersey. Our client, originally from China, was here on a work visa and his immigration status would be in serious jeopardy if a final restraining order was issued against him. In addition, he would be fingerprinted, placed in a statewide NJ database for domestic violence offenders, would be prohibited from owning or possessing firearms, etc.

The facts of the case were as follows: Our client and his roommate, another young professional from China, had an argument and physical fight at their apartment in Edgewater. The police were called and our client was charged with assault and terroristic threats for allegedly threatening his roommate with a knife. Ultimately, the parties had a fist fight but there were not any serious injuries. The lease at their apartment was over and the parties were no longer living together moving forward. In addition, the roommate’s visa was expiring and he was most likely returning to China if he could not remain in this country.

The trial was held in the Bergen County Superior Court before a family judge. Remember, any criminal charges related to this incident are completely separate and have nothing to do with the restraining order case. The judge found that predicate acts of domestic violence had been committed by our client based on the assault at the apartment where a knife was involved. However, he also found that there was no need for the restraining order because the parties no longer lived together and the alleged victim may not even be in the United States much longer. As a result, the Judge dismissed the restraining order. This was a great result for our client and the law firm which will allow him to remain in this country and work and continue his career.

If you or a loved one needs representation on a domestic violence matter in Hackensack, contact our Bergen County family law attorneys now for immediate assistance at 201-556-1570. The initial consultation is always provided free of charge. Also, review our restraining order resource center.