Arrested in New Jersey for a Gun from Another State

Facing Charges for an Out of State Gun in NJ? 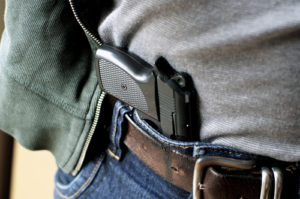 The New Jersey Constitution does not specifically provide for its citizens to own firearms. However, we know that each citizen has the right to own firearms under the 2nd Amendment to the United States Constitution. In New Jersey, the gun laws are very specific and require applications, permits to purchase, and strict compliance. What is not always clear is whether an individual from another state can transport firearms into/through this state, and if so, under what circumstances.

Can I Bring a Gun from Another State to New Jersey?

New Jersey has extremely strict gun control laws that may result in you going to state prison if violated. It is important that you fact check the law before transporting any firearm into the State of New Jersey. According to the New Jersey State Police, all firearms transported into the State of New Jersey must be carried “unloaded and contained in a closed and fastened case, gunbox, securely tied package, or locked in the trunk of the automobile in which it is being transported, and in the course of travel, shall include only such deviations as are reasonably necessary under the circumstances.” In addition, the gun must not be directly accessible in the vehicle and cannot be kept in the glove compartment or console.

In other words, N.J.S.A.2C:39-6 requires that your weapon must be unloaded, locked in a fastened case (or stored in the trunk), and stored separately from the ammunition. To be on the safe side it should be stored in the trunk and not able to be accessed from where you are sitting in the compartment of the car. Do not put the gun under the passenger seat and think that because you cannot reach it you cannot be charged. It must be secured unloaded in a fastened case. This is why it is best to keep the weapon in the trunk.

Bought the Gun Legally, Why was I Arrested for Driving in NJ with it on Me?

Did I violate the law by coming into New Jersey with a gun that I legally purchased and have a permit for? Yes, you violated the law and are subject to a second degree crime for handguns, and may receive five years in prison with a 42 month parole disqualifier. Unless there is a pardon (unlikely) or the prosecutor seeks a waiver of the jail time, it is likely that you will serve 42 months in jail before you are eligible to be released. You have an absolute obligation to follow the law in any state in which you are transporting the firearm.

You may be thinking: how can I be charged if I just didn’t know the law, right? Wrong, ignorance of the law is not an excuse or defense. Even if you are just passing through the state of New Jersey, you must follow New Jersey and federal laws in order to avoid being arrested. In addition to the requirements explained above, you must also follow Federal Law U.S.C. 18 section 926A. You may transport the firearm from one place that you had lawful right to have the firearm, to another location where you have the legal right to have the firearm, under their respective state laws. The firearm cannot be accessible from the passenger compartment and it must be fastened in the container, unloaded in the case, stored separately from the weapon.

Arrested for a Gun from Outside of New Jersey

The bottom line is that gun laws can be tricky and confusing. Lawful gun owners get caught in the crosshairs of the legal system and are often charged despite following the law. It is unfortunate, but if you are caught with a gun in New Jersey and you did not strictly adhere to the law, you may be facing serious time in jail. If you have been arrested for a gun from another state in New Jersey, you should hire an experienced attorney to help fight the case. The experienced New Jersey gun attorneys at our firm can review the case and assist in your defense. Call us today at 201-556-1570 for a free consultation about your firearm case.

Tags: Arrested for a gun Bergen County NJ helpArrested for gun from another state NJBrought a gun to NJ facing chargesCharged with out of state gun in NJNeed a lawyer for gun charge Essex County