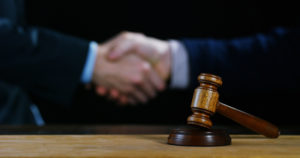 Facing criminal charges of any kind can be incredibly stressful. If you have been accused of a violent crime, the damage to your reputation and exposure to fines and prison time is enough to overwhelm anyone. People react to this level of stress is many different ways, some of which can lead to additional trouble. With this in mind, a recently proposed bill pending in the New Jersey General Assembly would stiffen penalties applicable to assaulting an attorney. If the legislation is ultimately passed and signed into law, it would mean enhanced consequences for any individual who reacts to a setback in court or a negative outcome, with anger and resulting violence toward their lawyer.

Perhaps you’ve had an experience where it’s completely justified to blame or even take out your disappointment on your attorney. Instead of running into this issue again, which can be disastrous for your new case and can even lead to new criminal charges, find a top criminal defense lawyer who knows what it takes to win in court and will fight for the best possible outcome. If you are in need of experienced defense representation proven through a track record of countless positive outcomes, contact The Tormey Law Firm for help today. You can reach our New Jersey criminal defense team anytime at (201)-556-1570 or contact us online for a free consultation.

Assemblyman Vincent Mazzeo recently proposed a bill to apply heightened penalties to assault on an attorney in New Jersey. This proposed legislation, Bill A-5589, followed an attack on an assistant public defender in Atlantic County. According to reports, this attorney was attempting to confer with and represent her client at a court hearing when the client became angry, lunged across the room, and pinned the public defender to the wall.

In response to this incident and in introducing the bill, Assemblyman Mazzeo explained that lawyers “stand by people accused of violent crimes” in what may be some of the most fraught moments of those accused people’s lives. He noted that attorneys may be unfairly singled out as targets when a judge hands down bad news from the bench. This can lead to explosive situations. Thus, the bill thus proposes enhanced penalties for anyone who takes out their frustration by assaulting their legal counsel.

While any assault in New Jersey may lead to charges for simple assault or aggravated assault, the bill in question would implement changes that essentially made any assault on a lawyer a felony offense, even those that do not result in serious bodily injury. The proposed bill would amend the current New Jersey assault statute (NJSA 2C:12-1), and would apply to any attorney in any criminal case or matter, including public defenders, private attorneys, prosecutors, and staff members, when any such people are performing court-related duties.

The current assault statute delineates simple assault, and the more serious crime of aggravated assault, as separate crimes. In general terms, a person commits simple assault when they attempt to or actually injure someone else, attempt to menace or frighten another person with a threat of bodily harm, or carry out certain other prohibited acts. Committing simple assault normally results in charges for a disorderly persons offense. However, a simple assault is elevated to an aggravated assault when the alleged victim is a law enforcement officer or certain other public servants.

Under the new bill, “simple assaults” would be classified as aggravated assault—a much more serious indictable offense—if the violent act was directed at an attorney. Bill A-5589 would thus provide attorneys with protections similar to those afforded to police officers, teachers, judges, firemen, prison guards, bus drivers, and several other categories of public employees.

If the aforementioned bill passes, an assault on an attorney could expose you to a potential aggravated assault conviction carrying months to years in prison and thousands of dollars in fines. Even now, assaulting anyone in a way that results in significant physical harm can lead to these consequences.

If you have been accused of assault in New Jersey, the most important thing you can do is find qualified, dedicated legal counsel. It is highly advisable to find someone with experience, many positive outcomes behind them, a solid reputation, who has been highly-rated by former clients, and who concentrates their practice on criminal defense. The NJ criminal defense lawyers at our firm choose to let our clients and our results speak for themselves.

For help with your criminal case in New Jersey, contact us at (201)-556-1570 today. We provide free consultations and serve clients throughout New Jersey, including in Bergen County, Esssex County, Morris County, Hudson County, Passaic County, Middlesex County, and Monmouth County.

For additional information, access the following: Bill Would Upgrade Charge for Assaulting an Attorney

« What Can Happen if Police Find You with an Open Container in New Jersey
Prostitution Charges vs. Human Trafficking in New Jersey »