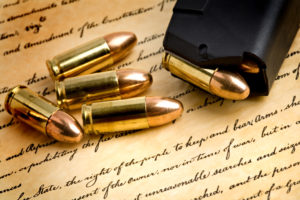 An Oradell NJ man who used to be employed as a US Customs and Border Protection agent has been charged with aggravated assault and weapons offenses.

The suspect worked as a border agent until 2012, when the federal government fired him for undisclosed reasons.

Earlier this year, the 34-year-old Oradell NJ resident was placed under arrest following a domestic violence incident. According to law enforcement officials, the suspect went to his ex-girlfriend’s house in Paterson NJ, aimed a loaded Glock-17 handgun at her head, and threatened to shoot her.

Now the suspect has set the legal process in motion by officially pleading not guilty to the very serious criminal charges. As a result, the case could soon head to trial in Passaic County Superior Court.

Since the suspect was arrested on January 5, 2017, he has been held at the Passaic County Jail in Paterson, NJ.

Possession of a weapon for an unlawful purpose is a very serious criminal charge punishable by 5-10 years in prison as a second degree crime. In addition, under the Graves Act, if a defendant is convicted under this statute he or she must serve a mandatory period of parole ineligibility before being released from jail. The typical plea offer, even for a first time offender, is 5 years in jail, 42 months to be served before becoming eligible for parole.

To learn more about this case, read the NJ.com article, “Former Customs Agent Pleads Not Guilty in Death Threat.”