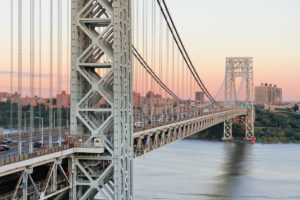 When the Mayor of Fort Lee, New Jersey allegedly did not support Governor Chris Christie’s campaign for reelection in 2013, the beginnings of the now infamous Bridgegate formed. In one of the highest volume traffic areas in the United States, the former Governor of New Jersey’s Chief of Staff, Bridget Anne Kelly, along with Port Authority Deputy Executive Director, William Baroni and Port Authority official, David Wildstein, planned a lane realignment for a traffic study that caused four days of gridlock in Fort Lee. The alignment was touted as a cover story aimed at political revenge for the Mayor’s refused endorsement of the then-Governor. Kelly was responsible for the Governor’s “relationships with local officials.” Just like the George Washington Bridge, this story has been etched into the political and legal history of New Jersey.

There are twelve lanes that connect Fort Lee and surrounding highways to the George Washington Bridge. Three of the lanes are reserved for transportation from Fort Lee.  However, on these occasions, the three lanes were reduced to one, which resulted in standstill traffic in the area for four days. Defendants claimed to have rearranged the lanes in attempt to conduct a traffic study, however, this was supposedly a façade to reprimand the mayor for his lack of political backing for the Governor. The alleged purpose of the study was to evaluate whether the Fort Lee lanes were all necessary. This study was effective on September 9, Fort Lee’s first day of school. However, this study was noted to be different than any other Port Authority study, defendants never obtained results, and overall, the data was not found to be beneficial. The Mayor called and texted about this issue of “public safety” as school buses, ambulances and traffic were halted, but there was overall silence. Defendants circulated this information with one another, and Kelly even went as far as allegedly saying, “Is it wrong that I am smiling?”  The scheme finally ended once the Port Authority Executive Director became aware of what was going on and all three individuals lost their jobs.

While the Court acknowledged the improper conduct of the defendants, it also pointed to the fact that violation of 18 U.S.C. §§1343, 666 (a)(1)(A) is evidenced if “…an object of their dishonesty was to obtain Port Authority’s money or property.”  The Government argued that defendants “‘commandeer[ed]’ the Bridge’s access lanes” and “divert[ed] the wage labor of the Port Authority employees used in that effort.”  However, this Court found the realignment was an “exercise of regulatory power” and therefore did not meet the statutory requisite for the defendant’s dishonesty to obtain government money or property.  In conjunction with that, it was further asserted by this Court that the labor costs were “incidental.” Based on Cleveland v. United States, 531 U. S. 12, 26 (2000), the Government had to show defendants engaged in deception with the object of their fraud being property.  The purpose is to prevent “criminalizing acts of dishonesty by state and local officials.”

The Court used its decision in Cleveland, showing how similar regulatory conduct found to be deceitful does not constitute fraud and thus is not a taking of property. The Court further opined that this case points to an issue of “abuse of power,” and “not every corrupt act by local and state officials is a federal crime.” Therefore, the Court reversed the judgment of the Court of Appeals and remanded the case for further proceedings.