Someone at a Store Accused You of Stealing? Know What to do and What to Avoid Doing 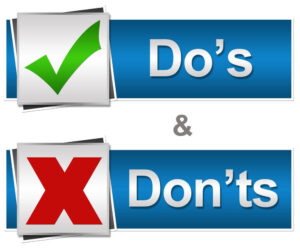 Shoplifting might seem like a minor offense that is typically committed by kids, but the truth is that shoplifting is still considered a theft crime – and it is taken very seriously by NJ law enforcement and prosecutors. A conviction on a shoplifting charge could not only result in jail time, but it will also leave you with a criminal record. If you are in a store and you find yourself accused of shoplifting, what matters most is that you remain calm and not do anything that will hurt your chances of avoiding a charge and/or conviction. One wrong move, and the situation could go from bad to worse. It is vital that you have a solid understanding of what you should, and should not, do in a situation where you might be charged with shoplifting. Here, our criminal defense attorneys discuss the top steps to take and not to take if someone accuses you of shoplifting in New Jersey.

Things to Avoid Doing When Accused of Shoplifting

The gravity of a shoplifting charge in New Jersey depends largely on the value of the store items. You could be facing felony theft charges or disorderly persons charges for a petty theft offense based on the amount of money attached to the merchandise. For example, if you are accused of shoplifting more than $500 worth of retail items, you can be charged with a third degree indictable offense. A conviction on third degree shoplifting charges can result in you being sentenced to 3-5 years in state prison.

1. Don’t attempt to pay for the item after the fact.

It’s possible that you accidentally put an item in your bag or purse and then left the store without paying for it. If this happens, you might have an impulse to offer to pay for the item. Do not do that. It could be perceived as an admission of guilt, which would only make matters worse for you. The best move at this point is to return the item to the store and see if that is good enough.

The store workers might try to get you to give them your personal information, such as your name, home address, phone number, etc. Don’t be rude, but also remember that you are under no obligation to tell them anything about yourself. Keep in mind that store security guards are not technically police officers. Even if they are off-duty cops, the fact that they are off duty means that they have no legal authority to demand your information. Wait for the police to show up, and then provide your personal information to law enforcement when asked to do so.

In fact, you don’t want to say anything to store workers once you’ve been accused of shoplifting. If a store worker or security guard stops you and accuses you of stealing, do not attempt to prove your innocence. Not only are you not required to show that their accusations are wrong, but you could end up making an inadvertent admission or incriminating statement that will be used against you later in court. The reality is that the employees and/or security guards have probably already made up their minds about the situation, so you are better off waiting for the police to arrive on the scene. Once that happens, however, the same rule should be followed. Provide your personal information upon request by the officers, but don’t make any statements that might be used against you later.

It’s possible that the store manager will try to get you to sign a document confirming that you attempted to steal. No matter what, do not sign any documents given to you by store managers or workers! Regardless of what you are told, they have no legal authority to force you to sign a document or anything else. Moreover, anything to which you affix your signature could potentially be used against you in court if you are charged with a shoplifting offense.

5. Don’t get into a physical altercation with store employees or security guards.

While you don’t want to engage store workers verbally, it is also extremely important that you do not let things get physical. No matter how angry or upset you might be about a store employee accusing you of shoplifting, do not let things get out of control. Even if it is ultimately shown that you were wrongfully accused of shoplifting, you could still face serious criminal charges for assault or robbery due to a dispute that results in injury. So, remain calm and make sure that you do not lose your composure for any reason.

Along the same lines of not getting into a physical altercation with store employees, it is also important that you avoid fleeing security guards after you are accused of shoplifting. Even if you believe that security has no legal right to detain you, don’t take any chances. Remain calm and if you were unlawfully detained, then let your lawyer raise this legal issue later. The problem with attempting to run from the scene is that it will absolutely make you look guilty, and it might constitute evidence that can be used against you at trial.

Regardless of how the situation turns out, the store manager may inform you that you are no longer allowed to shop at the store. You need to take this instruction very seriously. If you do attempt to return to the store after being told not to do so, it is very possible that you will be arrested and charged with trespassing.

What to do if a Store Falsely Accuses You of Stealing

Just as you need to know what not to do when accused of shoplifting, it is equally important that you understand what actions you should take in these circumstances. And the most important action is to get a lawyer involved as soon as possible.

1. Request to Speak with Your Lawyer

First, you need to tell store employees that you want to talk to a lawyer. Sometimes, people make the mistake of thinking that they will appear guilty if they ask to speak to a lawyer. But the truth is that having qualified legal counsel to advise you in these situations is almost always the correct move. Additionally, you should understand that the store workers have already decided your guilt in their minds. If they are accusing you of shoplifting, they already believe that you are guilty. So, don’t make things worse by trying to navigate your way out of this difficult situation without the assistance of a skilled defense attorney. Let the store manager, employees, and/or security guards know that you are not going to answer any of their questions until you talk to your lawyer.

Second, you need to hire an experienced attorney. Let’s assume that you are ultimately charged with a shoplifting offense. At this point, it is critically important that you hire a criminal defense lawyer who has experience defending clients against shoplifting charges. Your lawyer can examine the evidence, such as police reports, witness statements, video surveillance footage, etc., and build a strong defense in the event that the case goes to trial. Prior to trial, however, your lawyer might be able to work out a favorable plea deal with the prosecution so that you can avoid conviction and keep a shoplifting conviction off your record. In the best case, it may be possible for your lawyer to get the charges dismissed entirely based on the multitude of strategies that can be used to beat a shoplifting case.

If you find yourself in a situation where you are unfortunately facing shoplifting accusations by a store employee, manager, security personnel, or another party, contact an experienced New Jersey defense attorney at The Tormey Law Firm for immediate assistance. We offer free consultations 24/7. Call (201)-556-1570 today.

« New Jersey May Soon Mandate Gun Registration for New Residents
Can You Argue Self Defense in a NJ Criminal Case? »